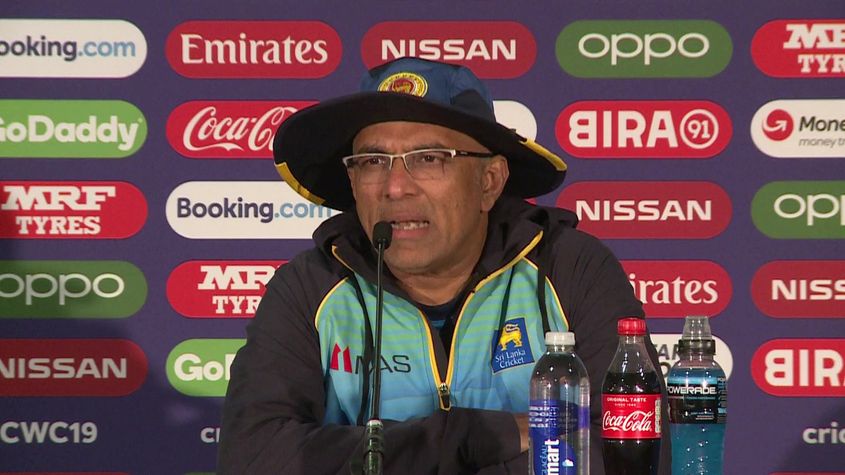 Hathurusingha said: “This gives us a lot of confidence because we really needed a win. We haven’t had much success lately. I’m sure you will see a better team, a better approach from our team after this win. We need this win badly.”

Sri Lanka’s next match is on Friday against Pakistan, conquerors of favourites England, at Bristol County Ground.

Hathurusingha admitted that his batsmen struggled to come to terms with the bowler-friendly conditions, but he could not understand their mid-innings collapse where they lost four wickets for five runs in 11 balls.

He said: “It’s very hard to explain. We were in a very good position at one stage. I think the wicket is such, it’s very difficult to start I think. When a batsman is in it looked an easy wicket to bat on, but we lose one wicket and then we lose three wickets in one over.

“There were a lot of tentative shots, that was the cause of some of the dismissals. We’re lacking in confidence because of what happened lately. We allowed them to come into the game.”

Hathurusingha paid tribute to Sri Lanka’s two match-winning bowlers, Nuwan Pradeep, who returned to the side to take career-best ODI figures of four for 31, and veteran Lasith Malinga, who produced two trademark yorkers to clean up Afghanistan’s tail.

He said: “That’s what you expect from Lasith. He’s a world-class performer and steps up when it matters.

“Nuwan had bowled really well in the two practice games as well and he single-handedly kept us in the game.”

On Sri Lanka’s match-winner with the bat, Kusal Perera, Hathurusingha said: “He’s an amazing player. We have given him full licence to bat the way he wants to bat. We know that when he comes off, most of the time it’s match winning.”

Hathurusingha does not believe there is much that he can do to inspire his side between now and their next match but he believes the players are desperate to improve.

He said: “When you play for your country there is a lot of pride at stake. They were all hurting [after New Zealand] – I’m sure about that. They really want to perform well for the country.”