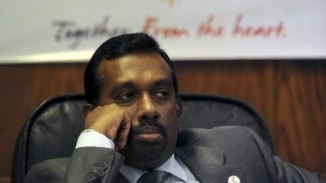 A cricket board official told me this week that SLC media manager Brian Thomas’s contract had ended and it would not be renewed. However, it was also reported that Thomas’s contract was due to end on June 30 but he was asked by sports minister Mahindananda Aluthgamage "not to report for work."

The media secretary from the Ministry of Sport Harsha Abeykoon took over from Thomas yesterday and is now serving as the acting media manager, as SLC is yet to find a suitable replacement for Thomas. The vacancy, according to the official who spoke to me, was advertised. But to the best of my knowledge, it was never posted on SLC’s website in their careers section. Perhaps they advertised the vacancy on just the print media in Sri Lanka which, if is the case, would be counter-productive to their goal of finding the best possible candidate for the job. While newspapers in Sri Lanka have a large circulation, a dependence on this one avenue alone fails to target the tech-savvy candidate who, like millions of others, may only read the news on the internet, look for job opportunities online and no longer buys newspapers.

Unfortunately, this is indicative of how SLC’s media unit was run under Thomas’s watch since 2009. They too failed to understand that there wasn’t one single entity that was better suited than others to get their message out there, which is a key task of the SLC media unit. The cricket board’s media unit must welcome all who are willing to help spread their message but over the last three years they have not.

Thomas was simply unwilling to engage with certain sections of the media and anyone who he deemed as unimportant. Since his appointment in July 2009, we at Island Cricket wrote to Thomas on numerous occasions but he was unable to demonstrate professionalism and courtesy with a simple reply. We heard from Thomas for the first time last week, after another senior SLC official informed him of our request to include Island Cricket in SLC’s media mailing list.

“You have send us a letter of request, along with your official Media Identification card issued by the Media Ministry,” Thomas wrote in response to my request. I informed Thomas that I was Canadian and Canada had no such ministry. He then asked me to send him a letter requesting him to add the e-mail addresses to his mailing list. Now compare this to our interaction with the England and Wales Cricket Board, Cricket Australia and Cricket South Africa; their media managers promptly did the needful with just one e-mail from us.

Recently, Sajid Sadiq of the popular Pakistani website pakpassion.net was asked by Thomas to obtain a letter from the Pakistan Cricket Board in order to be included in the SLC mailing list.

Over the last three years, Island Cricket was forced to rely on the kindness of individuals already on SLC’s mailing list to forward press releases to us, which does not reflect well on Thomas and the SLC media unit. It became evident to us that SLC’s former media manager considered some websites, journalists and media organisations more important than others. Perhaps he felt websites that he was not aware of or websites he did not frequent were not important. Anyone with a background in PR and mass communications, qualifications a media manager should possess, will know that clannishness casts a negative light on the entire organisation.

We hope that whoever replaces the former media manager will put an end to the aura of exclusivity Thomas created and interact with everyone regardless of how big or small they are.