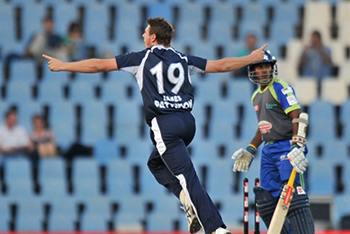 It has become so predictable. Don’t go looking for any reports in a Sri Lanka media outlet or newspaper of what are the woebegone Wayamba Elevens efforts in this year’s Indian Premier League showpiece, the Champions League, in South Africa.

Last week to hide the embarrassment as well as margin of defeat against Chennai Super Kings, Colombo papers published photos of Muttiah Muralitharan taking an amazing one-handed catch for the Chennai side as well as those of Suresh Raina and Murali Vijay after their impressive partnership. The reports were all about praising the IPL champions and barely a mention of how Wayamba were a lightweight punching bag and ended a poor second.

Also, do not forget, Wayamba captain, Jehan Mubarak asked Chennai Super Kings to bat first as it was seen how teams batting second won the games at the Centurion venue. Not only did the move expose his bowlers, it also created a growing culture of doubt since the first game.

Mubarak has won the three tosses to date and decided to bat first in Port Elizabeth and the third game against Victoria Bushrangers at SuperSport Park on the banks of the Hennops with its row of weeping willow trees that add to the character of the venue, and which the designers of Pallekele, near Kandy, used as a model.

While Island Cricket will at least publish the handouts from an unbiased Champions League media team of all matches, including the factual performances of Wayamba’s attempts at playing in another country, what is being hidden is the seriously chaotic performances that at times border on the dysfunctional.

And for this, don’t blame either Mahela Jayawardene or Jehan Mubarak, but the rest of the squad and the inadequate and flawed domestic club and provincial system from which Wayamba Elevens emerged as the T20 winners. It has long been highlighted how Sri Lanka’s twin tiered first-class system is not good enough to compete with teams from Australia and South Africa.

While the three IPL teams can call on their “foreign legion” of star players, both Australian state sides, the New Zealanders Central Stags and even the Eastern Cape based Warriors have some of their best talent playing for the Mumbai Indians, Chennai and Bangalore based sides. It’s a tough call, and as the Stags coach says, it is something they need to accept. They have lost Ross Taylor to the Bangalore side and Jacob Oram to injury.

Wayamba though, have had no disruptions and were even a little full of themselves this second time around as one of three sides playing in the Champions League a second time. It became confidence that was seriously misplaced. Playing on the flat fields of home is not the same as India, as last year’s results showed when they were outclassed, even by team’s playing in India for the first time. This year, they have been shown up as pretentious lightweights, a woebegone sorry sight as ever there has ever been.

Mubarak complained about the surfaces on which they have played at Centurion without quite understanding the environmental problems involved. Creating any type of playing surface on the South African Highveld this time of year and in what is their winter season, where there is no rain, requires manufacturing conditions. This means, unlike Sri Lanka and the South African coastal areas, there is no genuine grass growth until the summer rainfall season starts mid to late October.

As the summer rainfall lasts only five months until mid to late February, it’s like trying to wake a bear from winter hibernation. So, to provide any type of surface between April and September, the groundsman has to manufacture a hothouse tent type arrangement to coax grass growth and pitch conditions.

Also, to blame the conditions is far too convenient an excuse as both sides play on the same surface and explains how the batsmen have failed to master the pitches. This is where they need to examine their own failures in techniques and skills. The game against Victoria was a good example of how the good batsmen could put runs on the board and the remainder fumble their lines as it were. Five ducks explains the second capitulation.

Mubarak is hoping for redemption against the Stags in Port Elizabeth on Wednesday. Both sides have lost their three games, which means for this last one, it is all a matter of pride and ability of mastering the conditions. At least the Kiwis have been competitive, only their bowlers have let them down after their batsmen have posted imposing totals against stronger opposition with Jamie How, the stand-in captain, has attracted the attention of the IPL teams for his performances.