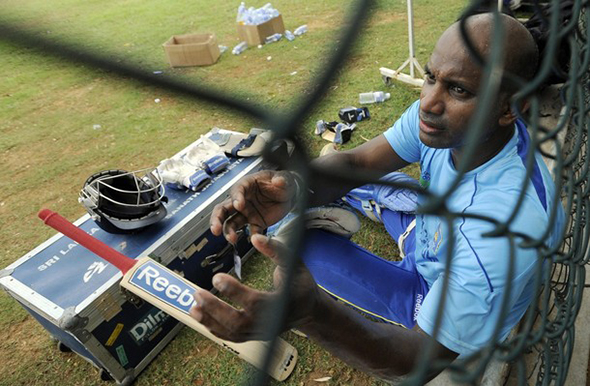 As for the axe falling on Jayasuriya, it is too early to dismiss him, if it is the selectors wish. ©AFP/Ishara S.KODIKARA.

It was Allan Donald who offered the adroit comment on television when he pointed to the difference between Sri Lanka teams he played against in the 1990s to those of today.

For one thing, they are fitter and more athletic. Does this then suggest how the side winning the 1996 World Cup was far from fit? Well some readers are not going to like this reply; in a sense, yes. To explain this, I need to delve into the comments once offered by Dav Whatmore the coach without being too revealing. And this is taking nothing away from that brilliant team performance after the adrenalin-pumping Eden Gardens semi-final win and the result in the final.

There are a variety of reasons of course for that result in Lahore’s dew-soaked venue – winning the toss and batting second against a ball that was an unmanageable mess to handled with a seam that had become like soggy knitting. But it happens in such conditions. Luck of the toss.

The point here is the facile win by nine wickets in the final at the Harare Sports Club where Sri Lanka put together an athletic fielding performance against Zimbabwe. It is also how Sri Lanka stand-in captain Tillakaratne Dilshan’s post match comment of the World Cup being the next target is ambitious if short-sighted. There is the Asia Cup to defend over the next 10 days, a series against India in the offing, along with one involving New Zealand as well and the West Indies later in the year, as well as a trip Down Under to Australia.

It may not be too well known, but if you watch Dilshan closely on the field when he is in charge, he relies a lot on senior players around him for advice: Thilan Samaraweera has a lot of good ideas and even that mature young man, Angelo Mathews, the team’s vice-captain, is a smart, street-wise thinking player and why he was the vice captain. It shows too with his field placement when bowling.

Anyway, as such terms as comparisons being odious is an old cliché, one that is far older that the laws of cricket, which is why suggesting how Sri Lanka without someone such as Sanath Jayasuriya at the Asia Cup is like India without Sachin Tendulkar. While an interesting evaluation, it also hides the selectors reasons for dropping the left-handed batsman, aka the Matara Mauler while Tendulkar is seeking an extended break from the game as a reason to skip the Dambulla event.

Tendulkar is second on the list of highest scoring batsmen (799 runs at 49,93) yet only one century.

The point here is that when former teammate and captain, Aravinda de Silva sat with the new selection panel to map out Sri Lanka’s pre-World Cup programme, the idea was to experiment with players they feel can be of use in this campaign, not batsmen with proven records.

As with India’s selectors, they too have a long-term idea of what their road map is and why there are too many pointing fingers about selection policy and failing to see the bigger picture. De Silva was voluble in his praise for Jayasuriya and you can expect him at some stage to feature in the pre-World Cup build up.

More interesting is why Sri Lanka’s selectors have decided on certain players as well as bowling combinations at a venue not being used as part of the CWC11 scenario. Rangana Herath being recalled from England where he has been playing for Hampshire to partner off-spinner Suraj Randiv with both gaining expert knowledge from the team’s vice-captain Muttiah Muralitharan.

The same could be said for the seam and swing bowlers. They saw enough of Thushara Mirando in Zimbabwe and games leading up to that tournament and are well aware of his capabilities while fellow left-arm seamer Chanaka Welegedara, with a slightly better record, needs to show his abilities in testing conditions.

As for the axe falling on Jayasuriya, it is too early to dismiss him, if it is the selectors wish. Apart from signing for Worcestershire in their T20 campaign, there are series against India following the Tests next month, a tour of Australia later in the year and matches against the West Indies.