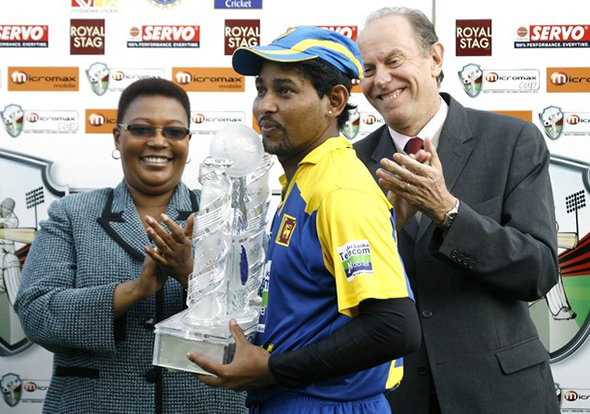 Tillakaratne Dilshan receives the trophy from Zimbabwe’s Minister of Sports and Education David Coltart (R) and the Deputy Prime minister Thokozani Khupe (L) after leading his team to win the series with 108 not out against Zimbabwe on June 9, 2010 in the final match of the Micromax Cup Triangular series at the Harare Sports club. Sri Lanka won by 9 wickets to claim the series title which also included India. AFP PHOTO / Desmond Kwande.

While winning the handsome trophy at the Harare Sports Club on Wednesday isn’t quite a matter of crystal ball gazing, Sri Lanka deserved to win this triangular tournament in the Zimbabwe capital.

When it came down to strategy and end game delivery, they were well ahead of losing finalists Zimbabwe, having out-manoeuvred the inexperienced Indian side led by Suresh Raina. India used this tournament as an experiment and it went out of shape for a variety of reasons. The first being the lack of a senior to guide the younger bowlers on the field and Raina’s understanding of how to handle the pressure as well misreading the lines of how to handle the bowling permutations during the games.

Barely an hour after the winning runs were scored on the African veld the new selection panel under Aravinda de Silva announced the Sri Lankan side for the Asia Cup starting in Dambulla on Tuesday. There are a couple of surprises, and one name missing from the senior squads for almost two years, Farveez Maharoof, is back again while Rangana Herath has been preferred to the so-called bowler Ajantha Mendis. The pity is how Thilina Kandamby is preferred to Dinesh Chandimal, who heads for Australia and the A Team tour.

For Sri Lanka, however, it is perhaps a little too soon to suggest that easing their way to a nine-wicket success in the 35th over of their innings and a total of 203 for one, means the Asia Cup and World Cup are there for the taking. It should have been a ten-wicket victory but for Tillakaratne Dilshan misreading his own game plan and Upul Tharanga being forced to sacrifice his wicket to save the team’s captain and a chance to score his seventh limited overs international century.

It was a seriously goofy effort by Dilshan and it became the third time this series that the tall Tharanga was run out. While winning the game and lifting the trophy is important, when it comes to the in-house team fines session, Dilshan should be slapped with a hefty one for the Tharanga run out.

From the moment Dilshan won the toss and Nuwan Kulasekara bowled with typical discipline, line and length, Zimbabwe were under the sort of pressure they need to learn to handle in the future. It showed as well as Brendan Taylor’s dismissal was to a stunning catch by Thilan Samaraweera in the gully off the bowling of Dilhara Fernando.

It has been an amazing turn around for the side that looked so disorientated in their first game in Bulawayo. Suffering from serious jetlag, they looked as though they wanted to be anywhere but on the field. They were going through the motions, the mind stuck in a time-zone somewhere between Florida and Bulawayo. Whoever is responsible for such disruptive travel arrangements needs to be asked to explain.

Athletes have enough to worry about other than what the time of day it is. The body clock is a delicate mechanism, so wondering if it is Monday or Tuesday, and working out pitch conditions is going to take longer than one day; just as how much bodyweight is needed to play the cut or cover drive in the different conditions; it all requires certain adjustment.

Having travelled halfway across the world from the heat of the Caribbean and Florida to the icy confines of Bulawayo in a matter of 38 hours and you know how crazy was the schedule facing some of the players. Little wonder the disorientation was playing havoc and mind games.

For a start, the selection of Dinesh Chandimal as wicketkeeper and filling the number three slot in the batting brought solidity at the top end of the order; his brilliant century in only his second ODI game vindicated not only Kumar Sangakkara’s demand that he be included, but his filling the wicketkeeping role became equally important to the team.

Another noticeable feature is the team’s energetic fielding performances in the three games in Harare. They performed like an international unit that was as much a team unit off the field as on it. Quality fielding and athleticism that had Allan Donald commenting the difference to when he played against Sri Lanka teams in the 1990s to today is their mobility. This is good to hear coming from a former international fast bowler and who earned respect for his tough fitness regime, part of the Bob Woolmer coaching philosophy.

Zimbabwe though have surprised many and India are sulking over their inability to make an impact in this series, squeezed as it has been onto the calendar as a filler to help the African country earn a little more exposure in the build up to CWC11. This is after their self-imposed moratorium of withdrawing Test status and playing bigger nations because of major off-field ructions with selection and politicised boardroom machinations. These created the image of what had been little better than a banana republic, their reduced player strength little more than a rabble of misfits masquerading as an international team.

It showed too several years ago when competing in South Africa in the second tier of the first-class system and they were regularly thrashed. Not a good advert at all, for what is a full member of the International Cricket Council. Now they have emerged as a competitive nation, but resumption of their valued Test status is some way off. Yet they did go into this tournament with a strategy and it worked.

Sri Lanka, however, once they settled into their tour mode environment had the better pre-tournament planning than India. The Indians decided to experiment with combinations to get a better idea of which members of their so-called bench strength are capable of handling pressures and give the lesser players a chance. The bowling in this particular series needed a senior bowler to guide the youngsters on the field, which a coach can’t do.

Raina’s complaint in Zimbabwe is how the bowling failed. This was always going to be the case when you look at the strength of the Sri Lanka side who had nine Test players and experienced ODI players in their ranks. This differs with the views of Tillakaratne Dilshan who suggested Sri Lanka had a young team in Zimbabwe.

Certainly, the talented Chandimal is still 20, but to suggest someone such as Jeevan Mendis is young at 27 is as bad as stretching the excuses Mahendra Singh Dhoni made after the team’s exit from the Caribbean ICC World T20 event won by England. Inexperienced at ODI level, but so were more than half the India side in Zimbabwe and why it would be harsh to dismiss the squad other than those genuine failures like Karthik.