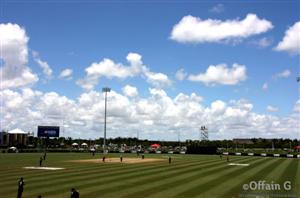 Excuse the smirk. Anyone following events surrounding the Sri Lanka team in Florida would have wondered just how serious has been the T20 exercise at Lauderhill in the US of A.

One comment from a former Australian now tied to a popular Asian TV channel in Dubai of the way the ‘pitch sucked life out of good strokeplay’ explained just how insouciance has been this event in terms of its value. Big boundaries are one thing, but pitch conditions where hitting the ball off the square requires a major effort begs the question, what of the future?

No matter the jingoistic views of the two captains, if the pitch died the way it did, and the surface was likened by Simon Doull, the former New Zealand seamer as being slower than that prepared for a whacky sport known metaphorically in places like New Zealand, Australia and even South Africa as “old folks’ marbles” (and for which they even have a Commonwealth Games medals), indeed, what are they hoping to achieve.

It looks to be a wonderful stadium, but the pitch conditions and the 1-1 result is about as equal as you are going to get at a site approved by the International Cricket Council, but the aftermath of the series is going to be far more interesting. Initially it was to have made its debut three years ago as a World Cup venue; not only was the venue far from finished, there were problems as well with the surface. The square was found to be unfit for such an event. Maybe in the future, who knows?

As the Kiwis rest their weary bones after a long haul before their next South Asian sojourn, and yet another meeting with India and Sri Lanka on this currently rain-drenched island, players such as Tillakaratne Dilshan (deputising as captain) and Angelo Mathews (his senior lieutenant) head for Zimbabwe, with Colombo a pitstop in between. This you need to understand is more to collect kit for the series in the landlocked south-central African country and shake hands with family and friends before heading for despot Uncle Bob Mugabe’s nepotistic fiefdom.

It is such an interesting country. On my last visit in 2003, popping up from my home in Centurion to see the West Indies play a Test in Bulawayo and Brian Lara in action in November, asking a couple of people whether they had any news of a particular family of close friends, resulted in a visit to my hotel room from a not so friendly posse of the local security branch. In the apartheid days in South Africa, especially after 1976 student uprising that shook the white minority establishment, it was a regular occurrence to expect Bureau of State Security goons to tap on the door of my home and ask why it was necessary to visit a certain ‘township’ a polite euphemism for a ghetto.

Subterfuge was needed to explain the visits and cricket was used as the excuse, and as happened in Bulawayo, inquires about the disappearance of a family of five, who have never been seen again, makes you wonder. They were a lovely young Shona couple with degrees in teaching and met in London in 1969, returning to help rebuild the nation in 1982. Along with their three children, they disappeared, with others, in 2002. Yes, such an interesting county, and why mention any of this about Sri Lanka cricket and selection?

It is to explain that what you see taking with team selections is a riddle with no obvious answers as those with their agendas have their bias swept under the carpet.

Currently, Sri Lanka’s selectors are playing with the careers of any number of players: they are also second-guessing pitch conditions in Zimbabwe and Australia. In fact, they are running in circles trying to find answers to questions about which they have no idea.

For a start, it is time to forget the T20 circus and concentrate on the 50 overs format. Sri Lanka have a possible 15 or 16 ODI games before the World Cup, and as with India, the depth and quality bench strength, is being seriously questioned. If reports from a source coming out of Miami, and confirmed in Colombo are accurate, convener Ashantha de Mel has found his three merry obfuscators, which includes a man who went missing during a Test against Pakistan when Waqar Younis was bowling until it was ‘safe’, decidedly uncooperative, suggesting serious problems ahead.

It has been recommended Aravinda de Silva be approached to help out in selection and guide their thinking and also used in a consultancy capacity as a coach. It would be a good move, but knowing the little master, he won’t move in that direction unless he has carte blanche in selection issues and coaching policy, and that is highly unlikely.

As it is, one of the selectors is tied up with a member the government appointed, non-elected interim committee, who basically answer to no one, and do not appreciate satire, and have joint vested interests in a couple of players in the senior pool. The selector wants to ensure that one or more of his players are selected for the World Cup so that he and his interim committee pal can earn a fat bonus out of the payments.

If this is indeed a genuine story, and the sources indicate there is lot more dirt hidden in the squalid underbrush around the environs of Maitland Place, the concerns facing Sri Lanka Cricket is that there are those holding the sport to ransom, placing careers of any number of players on hold until after the five week tournament when they will quit leaving others to pick up the pieces and rebuild from the fractured mess surrounding the livelihood of demoralised players.

Far-fetched? Believe what you like, but the way it is shaping, leg-spinner Malinga Bandara has been singled out along with Farveez Maharoof and to an extent Kaushal Silva, for a metaphorical firing squad. As a disgusted Bandara accepts a county contract with Kent and Chaminda Vaas takes up a Northamptonshire post, the selectors have been given an embarrassing slap in the face.

As it is, two batsmen going to Zimbabwe are Chamara Silva and Thilan Samaraweera along with five fast-medium bowlers to prove what leaves a question mark of dubious distinction. Tharanga Paranavithana as well as Upul Tharanga have been pushed into the A Team for the Australia tour.

As with Bandara in Bangladesh in January, Maharoof, added to the A Team’s limited over squad with great reluctance. It is understood he will play only if there are injuries and may get a practice game as a form of compensation to appease critics.

How factual is this claim depends on who you want to believe, and as there is no stand by group for the Zimbabwe visit, either there is a cost factor, De Mel is being overruled by a three-man mob who are only interested in what they can get for themselves and to hell with serving the game or Sri Lanka. Dangerous and rocky times are ahead for Kumar Sangakkara as players he wants are ignored for players he doesn’t and knows who cannot win games.

You can guarantee though, along with the selectors, there are those who are pushing for fatty boom- boom Thilina Kandamby and Chamara Kapugedara. Okay, what about some facts?

If anyone would care to check Kandamby’s record for the series in India last December and the Bangladesh triangular, they might wonder as well why he is still being selected. In India, his average of 36.00 is boosted by two not outs in scoring 108 runs in five innings with a top score of 27. Chamara Kapugedara was even more lamentable: 17 runs in two innings at an embarrassing 8.50.

In the triangular series in Bangladesh, and which Sri Lanka won, which some have already forgotten, so smitten are they by the inarticulate and technique dysfunctional T20, Kandamby’s three innings produced 27 runs at an average of 9.00. This gives him 135 runs in eight innings, and boosted with two not outs an average of 27 – hardly what you would call international winning form is it.