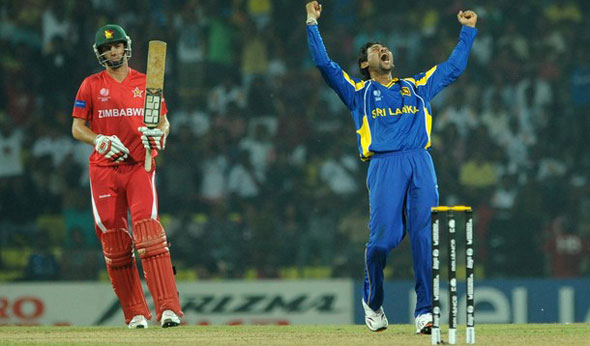 Tillakaratne Dilshan celebrates after the dismissal of Zimbabwe cricketer Craig Ervine during the Group A match in the Cricket World Cup tournament between Sri Lanka and Zimbabwe at The Pallekele International Cricket Stadium in Pallekele on March 10, 2011. Dilshan finished with a rare double, picking up four wickets with the ball and a century with the bat. AFP PHOTO/ Ishara S.KODIKARA.

Scoring centuries and breaking records is becoming something of a habit for Upul Tharanga. The 26-yeat-old Sri Lanka lefthander already has his name on one international list with the retired Sanath Jayasuriya.

That is the limited overs international world record of 286 against England at Headingley, Leeds on the 2006 tour, when Tharanga was making am impression for the first time at this level. He tells you that he learnt a lot from that tour and the following months. There was, though, no World Cup century in the Caribbean.

While his partnership of 282 with Tillakaratne Dilshan, against Zimbabwe on Thursday, fell five runs short of dismantling that record, it is possibly a better reflection of the state of the way the game went.

Frankly, even the overawed Zimbabwean babes in the wood would admit their bowling strategy was far from challenging.

Before a venue overflowing with good-humour in the leafy confines of Pallekele, and with its fast bouncy surface and slick conditions after the sun settled, the Tharanga role in the first wicket partnership of 282 in the World Cup Group A game was one of sensible and attractive batting. It is also the fourth highest wicket partnership in the ODI arena and set up an impress 327 for six total, which the African side was never going to overhaul.

Apart from being Tharanga’s first World Cup century, the way he went about gathering his runs in this big partnership created the example of how to make the most of good batting conditions with the ball coming on to the bat.

Although Dilshan generally dominated the partnership and reached three figures first, the more stylish Tharanga played with equal focus and punched the ball around without too many qualms.

More remarkably, Dilshan’s double of a century – his first in months- and four wickets, elevated him to an elite band of players in this group headed by the incomparable West Indian Sir Vivian Richards. Picking up runs with handsome drives and delicate cuts, he used his feet with effect and continued to display some of the form shown in earlier World Cup games.

He joins fellow Sri Lankan Sanath Jayasuriya (122 and 4/39 against Australia in Sydney 2003) along with Sourav Ganguly and Sachin Tendulkar in a list of 12 players.

What was surprising were the type of fielding and bowling tactics used by Zimbabwe. Whether this was a pre-match game plan; or one that evolved early on to try and combat the heavily inflated runrate is uncertain. Whatever the plan was at the start, a five/four field and defensive bowling tactics was not going to work against the Sri Lanka openers.

For a start, Dilshan was not crowded by the field placings at an early stage of his innings to create pressure and force him to cut in the hope of getting his wicket. This has been exploited by lesser sides than Zimbabwe and generally, such a strategy has worked for the fielding side.

Zimbabwe were, it was argued, overawed by one of the World Cup favourites and it showed as well at times, despite taking catches in the deep when Sri Lanka, in a foolish chase for runs, lost six wickets for 26 runs in a matter of 22 balls, two of which were wides.

It is understandable how Sri Lanka want to boost their run rate as they went to the top of the Group A log with seven points and the game against New Zealand in Mumbai to wrap up their pre-quarter final programme.

It was a seriously untidy patch of batting from the fall of Tharanga’s wicket for 133 in the 45th to the loss of Chamara Silva for four at the end of the 48th over. It is one thing for Sri Lanka to plunder a hapless attack and wreck carnage in the process. It is another to create a situation where valuable time in the middle is wasted on reckless strokes that become meaningless statistics in the book.

Zimbabwe had no hope of matching the total and their capitulation was a matter of waiting for the implosion once openers Brenden Taylor and Regis Chakabva departed with the score at 116 in the 20th over. The loss of 10 wickets for 72 runs in less than 20 overs explains how the young side struggled to hold their own in another debilitating performance of lower-order inability to handle bowling of this calibre.

It was Muttiah Muralitharan, in his last game before his home crowd, whose three wickets for 34 began the slide. He pushed the doosra through the defence of Chakabva with the fifth ball of the 20th over that knocked off the off-stump bail. It skidded more than bounced and the batsman had no chance.

Once Taylor fell for 80 to a stroke, which he was rightly fed up playing against the bowling of all-rounder Angelo Mathews, the Zimbabwe middle failed to capitalise on his adventurous innings. Tatenda Taibu edged a catch to Kumar Sangakkara and the domino effected followed.

This article first appeared on Trevor Chesterfield’s column on Cricketnext.com and it is republished here with permission form the source.