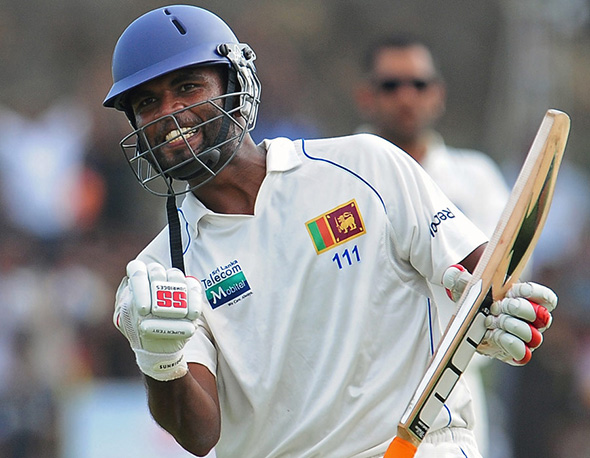 Tharanga Paranavitana reacts as he celebrates scoring a century (100 runs) during the first day of the first Test match between Sri Lanka and India at The Galle International Cricket Stadium in Galle on July 18, 2010. Hosts Sri Lanka made an impressive start in the first cricket Test against India, racing to 91 for one by lunch on the opening day. AFP PHOTO/Lakruwan WANNIARACHCHI.

Maiden Test centuries do not come more deserving than is this one from Sri Lanka’s opening batsman Tharanga Paranavithana against India.

It is understandable as well, why there will be celebrations in the team’s dressingroom and the left-hander’s home, as they watched his studious undefeated innings of 110 on the first day of the opening Test of the series at Galle International.

Here is a victim and a survivor of the Lahore terrorist attack on the Sri Lanka team bus in March last year and is performing what the Australians call a gutsy streetfighter’s innings. He enabled Sri Lanka to reach a first innings total of 256 for two before storm rains lashed the venue minutes after bad light halted play at the end of the 68th over.

Paranavithana was slumped in his bus seat after he was hit in the chest by shrapnel during the maverick assault by a mob of fundamentalists. At the time, his team mates didn’t realise until the bus arrived at the Gaddafi Stadium that he had been among the wounded and was treated for the chest injury.

While his Test career was far from over, there would be those who believed in his talent and that he was always in with a chance continue his career. Not that it has been easy. After all, there is admission of experiencing occasional cold sweats at night, which means facing such fast bowlers as Ishant Sharma and his medium pace new-ball partner Abhimanyu Mithun pales almost into insignificance by comparison to live bullets being fired at a bus.

A pupil of St Mary’s College, Kegalle near Kandy in the centre of the emerald island, and another of the group of outstation players in the side, Paranavithana was enticed to join the Colombo club Saracens whose coach Mahesh Weerasinghe had noticed his talent when scoring a triple century. His B Section Premier League performance then encouraged by a former Ceylon batsman of note, Anura Tennekoon to invite the youngster to join the prestige Sinhalese Sports Club.

“He is someone who at first glance you know who is going to become a Test batsman,” Tennekoon said when he first eased Paranavithana first into the national A team squad. “It had taken a while, but he went to show the selectors what he can achieve.”

This was a comment made after the Sri Lanka A team tour of South Africa followed by a highly successful domestic season. Tennekoon is now the manager of the Sri Lanka Test and ODI squads and has been also advising the younger player to adopt a more positive approach. It was evident on day one of this first Test against India. He anchored the innings with patience and skill, indicating he would not surrender his wicket so easy.

It is the type of performance Sri Lanka need, for although it was largely batted in the company of his captain, Kumar Sangakkara, whose attacking innings of 103 in a partnership of 181, the tall upright batsman handled the bowling with style and did not allow the Indian bowlers to trouble him as he fashioned some handsome drives and eased his way through whatever India’s bowling attack tried to unsettle him.

He was also full of praise for the Indian bowling, which has been criticised by their media as being the weakest in a decade.

The above article by columnist Trevor Chesterfield was commissioned by the mass circulation Indian tabloid Mid-Day as a reflection of the first day’s play of the ongoing Galle Test match. It is posted here with permission from Mid-day. This article was penned for an Indian audience, and was read by an estimated eight million subscribers.