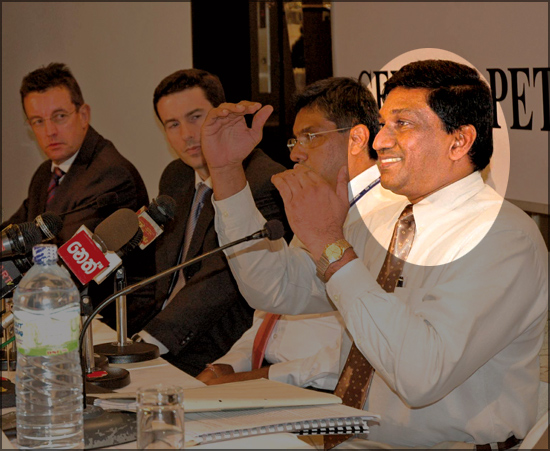 (Or -what SLC and ICC didn’t want you to know)

Ashantha De Mel’s selection panel had their arms twisted hard enough to include him for the ICC World T20 event in the Caribbean.
There is a cynical laconic line from the Lloyd-Webber-Tim Rice music stage hit Evita that succinctly explains the farce of Good Friday’s events in Colombo. It is of how the Sri Lanka Cricket and the International Cricket Council set out to con the media with a conference and a wine and dine affair at a beach front hotel and later a banquet at another upmarket venue and both sans the ICC president David Morgan.

In a way, it was designed to show the chumminess among the Asian communities, and all this going on as Sanath Jayasuriya watched Mumbai Indians romp to another win in the Indian Premier League without him in their playing ranks. He has become superfluous to their needs, but has the political clout at home that ensured Ashantha De Mel’s selection panel had their arms twisted hard enough to include him for the ICC World T20 event in the Caribbean.

Anyway, that line is “Oh what a circus, oh what a show . . .” and dismisses with sarcasm the gaffes being made in the sanctimonious verbal floor show from the rotund vice-president of the ICC, Sharad Pawar and his chief executive sidekick Haroon Lorgat.

When answering a question, reports indicate Lorgat’s response could be construed as being of a dismissive nature, brushing aside criticism of holding such a wine and dine show on one of the three special Holy Days on the Christian calendar which happened to be a Friday when good Muslims go to their mosque.

As I declined invitations to either event for religious as well as personal reasons, I had a colleague to give me the Lorgat quotes so that I could read for myself the South African’s comments on the tricky issue.

These are: “We are not insensitive to religious sentiments or cultural diversity of our cricket-playing nations. April 2 also marked Good Friday, but with great reluctance and hesitancy we had to schedule the ICC Ticket and Mascot Launch, as the day marks the 365 days countdown to the 2011 ICC World Cup in the Indian subcontinent.

“It will also be on 2011 April 2 that the ICC Cricket World Cup Finals will be played at Mumbai, India.”

Logart, it is said, suggested there were time when considering the importance of ICC events how they had to compromises regarding days which are of religious importance. It was also his view that being a devout Muslim he too would have preferred to have been praying at the mosque rather than briefing the media.

Frankly, both comments were inappropriate, the first sidestepped the issue; the second need not have been said at all as it clouded the views of others.

As this media showcasing took place with a 70 percent absenteeism among the 100 print media invited, the seats that were hurriedly filled by SLC friends and family members for a free lunch and in some cases given accreditation to fill media seats, it is interesting to note how the ICC vice-president Pawar delivered all the oratory with Lorgat. It was such a clever Machiavellian camouflage ploy too, to hide the absence of the ICC president Welshman David Morgan. How this was missed by the local media, fawning over this shoddy SLC/ICC publicity stunt is interesting.

It appears no one asked the question of where is the head honcho of this organisation. Did he not get an invite? Or is it because that it is strictly an Asian party and Morgan is not an Asian he wasn’t thought to be among the invitees? So far, not a word explaining Morgan’s absence, yet he had such a lot to say in media releases several weeks ago praising the CWC11 event when the Bangladesh part of the ICC’s central organising committee’s launch was held in Dhaka. Or in fact is it because it was held on April 2, there was a feeling is one of embarrassment at inviting the president of the world body to a function of his own organisation? Which also pokes fun at Lorgat’s ‘religious sensitive’ comments.

No doubt the SLC or the ICC will dash off an “official excuse” for Morgan’s absence in a media memo. This is how he had not been available for personal reasons – he was taking a convenient Easter holiday break – while the portly Pawar exercised his pompous political bragging rights with a metaphorical, “I’m in charge here, this is my show”, taking a line from Lorgat’s spurious “religious sensitivities” remarks.

It shows why the launch was a farce and that fingers should be pointed at those responsible: what has escaped notice is how, as explained, the lunch and banquet were in part designed to celebrate that it is 365 days to the final of CWC11, which is scheduled to be played in Mumbai, NOT Colombo, and where in this case the banquet should have been held and for Pawar and Lorgat be given tissues to wipe their chins.

As such the SLC in organising a so-called ‘countdown’ event for April 2, to coincide with the date of the final in Mumbai next year, exposed the SLC and other committees involved to justified derision for staging what was little better than a fancy media con job. As such, they have sullied the good name of the honest people involved in the game in this country and elsewhere.

Hopefully, vice-president elect, John Howard, while another politician will at least bring a sense of history and tradition back to the halls of power, for at present, it is seriously missing with this misbegotten menagerie running its affairs.

Also, it is also hoped that the clubs on the island retook control of their administrative rights and for the government agree to dump the interim committee as this one has created more problems than anyone can imagine. It has become a joke as have those running it.