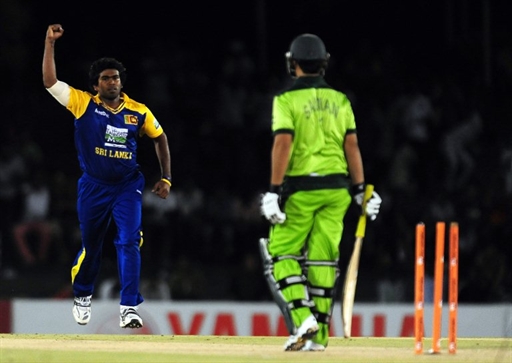 Aravinda de Silva’s selection panel will have learnt a number of lessons from Sri Lanka’s last-gasp victory at Rangiri Stadium Tuesday night. One of the more important is the value of Lasith Malinga.

As for the remainder, the analysis of the form of players and their capabilities under pressure, is like the old cliché of how the jury will be out on several players after opening their defence of the Asia Cup with a victory by 16 runs over Pakistan.

Last-gasp? Well, with three overs of the innings still to be bowled and Malinga about to finish his missile like spell, Kumar Sangakkara was gambling on the fast bowler to deliver the match-winning delivery during that over. It was three wickets in 13 balls – one a wide – for four runs sealed Pakistan’s fate as he bowled in tandem with Muttiah Muralitharan.

What it came down to is Malinga’s long net sessions with the old ball; learning to get it to work as well as the new ball by getting it in the right areas. It is the advice he followed by bowling coach Champaka Ramanayake that convinced him he could do both. He proved it too with his last two overs of the innings.

Just who Sangakkara would have used in such dire circumstances had Malinga failed to wrench victory in that final over for his captain, team and country would have been interesting. Nuwan Kalusekara was left with one over to bowl and Farveez Maharoof, making his return to the side with a rust-laden performance with two remaining overs. Hard thinking would have been needed in such tight circumstances for the Sri Lanka captain.

Forget the jingoism and media hype. The last two overs became a matter of do or die stuff with Muralitharan taking the prized wicket of the innings, Shahid Afridi to set up the lower order implosion. It worked a treat, but had it not . . . It might have been a different story.

Another lesson for the Sri Lankan selectors is what to do with Chamara Kapugedara. Word from that quarter is how he is in this tournament on trial. They would have been disappointed again. As with Graeme Hick for England in the 1990s, so we have Kapugedara for Sri Lanka. A succession of failures littering his CV from tours of Bangladesh, Zimbabwe and now Dambulla in the Asia Cup, makes for paltry reading.

When Kapugedara joined all-rounder Angelo Mathews with the score at 150 for five, it was time for the young man to deliver finally on his so-called skills and talent. He may have first-class ability at premier league and provincial level, but when it comes to the international arena, his average is plummeting faster than the Sri Lanka rupee on world markets.

After his score of two against Pakistan, sucked into the cut that has led to his undoing on five occasions in his last 11 innings, he now has an average floating in the 18 runs an innings bracket for the last 11 ODI innings explains a growing predicament as his overall average is 21.66 . Not the sort of middle-order confidence for a World Cup, which is what the De Silva selection panel will be seeking, but not seeing.

It needs more than an improved fielding ability as well to convince the selectors he deserves another chance – against Bangladesh on Friday.

This brings me to the point about Sri Lanka’s improved fielding. Critics are missing the point. Their poor technique, support for the bowler and fitness levels, which drew such adverse comment and caused Sangakkara to lament over and over at the drop in standards, was part of Sri Lanka’s problem in the Champions Trophy, the Indian and Bangladesh tours. It led to criticism of monitors of IPL teams. What has happened since then is how Stuart Law has sharpened up the fitness and fielding planning and is why it has improved from the start of the Zimbabwe tour.

There has been a notable difference between the tour to Bangladesh and the ICC World T20 in the Caribbean and the Zimbabwe tour. It has been an impressive turn around and good to see. It suggests that the new assistant coach has monitored the problem areas and has sharpened reflexes. What will be interesting in to see how Thilan Kandamby fields when he gets a game.

It was the old firm of Shoaib Akhtar and Mohammad Asif who placed early pressure on Sri Lanka with a wicket each by the first ball of the ninth over with 36 runs on the board. Umar Akmal taking an impressive catch to get rid of Tillakaratne Dilshan off Asif’s bowling. It wasn’t as great delivery either, but it one of any number of fine fielding efforts seen from two sides.

Mahela Jayawardene will feel sorely aggrieved as well by his “dismissal” with Billy Doctrove awarding the honours to Shoaib Malik on appeal for an lbw decision, the ball coming off the end of the bat into his pad for 54. It was a howler in the Daryl Harper category and the worry is that the West Indian is here for the tournament.

Up to that stage, Jayawardene had batted with impressive confidence in his strokeplay and general loquacious style when his fluency is working at its silky best. It was a desperately cruel way to end the innings of such promise.

With that wicket falling at 150 and Thilan Samaraweera, giving his wicket away at the start of the following over, Sri Lanka needed someone to take control of the innings and build a competitive total. This is when Kapugedara joined Angelo Mathews to restructure the lower-order in an act of smart thinking and quality batting.

Kapugedara blew his chance to impress the selectors and the crowd that was increasing in size and also impatience he looked to be playing from memory and the push there, dab here, cut that a way explains the all the uncoordinated effort. He was begging to be dismissed and it came as no surprise when he was.

It was left to Angelo Mathews to bring stability to the lower order; rotating the strike, yet taking full advantage of some wayward bowling, Mathews worked the ball around with some purpose and smart, ODI thinking. Hopefully Kapugedara was watching the younger, more talented all-rounder of the two 23-year-olds, how to handle tricky situation with a mix of aggression and marshalling the runrate with his own at 90.16.It is why Sri Lanka were able to crawl out of a hole.

Yet Sri Lanka displayed more all-round consistency than Pakistan and it showed with victory by 16 runs in the 47th over of the innings as the Pakistanis flattered to deceive as they went in search of a competitive 243 for victory but lost their way against steady Sri Lanka bowling at the death.

This was despite a brilliant responsible century by Afridi. Batting as if he was last man standing, fighting cramp and the mounting runrate, he jogged his way along, groaning with agony as he tumbled to the ground on a couple of occasions and declining use of a runner. It was brave effort under lights and showed that the Sri Lanka bowling was sharp and decisive, especially Lasith Malinga.

It was Afridi’s first three-figure ODI innings in five years and when he fell for 109 it was a stunning reflex catch by Kumar Sangakkara off Muralitharan’s bowling. Up to that point, he had hit five of his seven sixes of Murali. Quite a punishment for the off-spinner on a pitch which gave some help.

Sri Lanka’s bowling hero of the evening’s entertainment was Lasith Malinga with his career best ODI figures of 5/34. In the last ball of his spell, with the Sri Lanka captain Sangakkara gambling on the missile accuracy of the sling-shot bowler’s accuracy to take the crucial lower-order wickets.