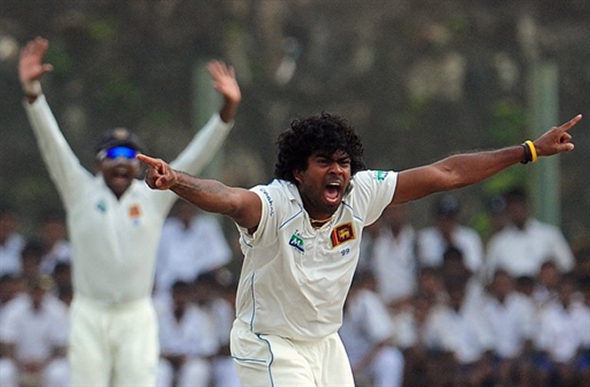 Lasith Malinga celebrates the dismissal of Indian cricketer Gautam Gambhir during the third day of the first Test match between Sri Lanka and India at The Galle International Cricket Stadium in Galle on July 20, 2010. AFP PHOTO/ Lakruwan WANNIARACHCHI.

Lasith Malinga’s explosive return to the Test scene against India has cast aside whatever doubts there have been about his future as a front-line new ball bowler for Sri Lanka.

His presence created an added dynamic dimension to the Kumar Sangakkara-led side and earned him the man of the match award in the first Test here at Galle International. Both MS Dhoni and Sangakkara heaped praise on the fast bowler, with Dhoni calling his near one-man demolition in the India second innings along with his maiden Test half century “an impressive performance”.

His five for 50 return in India’s second innings of 338 almost went unnoticed by the packed ground whose cynosure was focused on Muttiah Muralitharan. The ‘Smiling Assassin’ had to wait until Pragyan Ojha edged a catch to Mahela Jayawardene, to claim the elusive 800th wicket in what his role is at this level.

It was Malinga, who had helped himself to a total of 60 in the Sri Lanka first innings of 520 for eight, declared, collected two wickets in the first innings that caused India early problems. He collected the scalp of Gautam Gambhir twice in the match and set the trend that had India re-evaluating their strategy against his type of bowling.

“He (Malinga) is someone you need to study and educate yourself how to play him,” Dhoni argued. “His style of bowling, with the arm coming from behind his back, is difficult to pick up and there are times when you lose sight of the ball.

“There is also the pace of his deliveries and the length he bowls,” Dhoni added. “As we haven’t faced him for sometime in a Test, it is a case of getting used to not only the speed at which he bowls but to counter the extra acceleration he bowls at. As can be seen by his two dismissals of Gambhir, he swings the ball away sharply.”

Dhoni emphasised this with the comment on how it was the Malinga factor, which created, added problems for India in their second innings.

“Whenever we had a partnership going the Sri Lankan bowlers came up with a beautiful delivery to get the batsman out. Whether it was in the first innings the second innings, it was their good bowling. So we were not really able to get the big partnerships going and Malinga played his part in this,” he added.

“This is not an excuse. Malinga has the kind of action that gets the reverse swing going.”

Dhoni also pointed out that when India began their first innings, it was already day three and they were not batting on a fresh surface, which made it that much more difficult to bat on.

Past experiences of Malinga have shown the way he has the habit of delivering the ball to the right-handers, bringing the ball back in to them.

“In this match we saw he could even take the ball away from the right handers,” said Dhoni. “If you don’t pick a single delivery of his you can be in trouble.”

Malinga was returning to the Test side for the first time since December 2007 when he played England in Galle and has had a knee injury that kept him out of the game for long spells. At one stage, there was concern whether he would play in another Test, but according to his Sri Lankan physio Tommy Simsek who monitored Malinga’s progress carefully, he was now fully fit to play in a five-day Test match.

"He is keen to play and we are confident he will be fit to last five days,” he said two weeks ago. ”What has helped is that he has been bowling long spells at the nets and has shown no side effects."

Since making his Test debut against Australia at Darwin in 2004, the 26-year-old Malinga has played in 29 Tests now with 98 wickets. The second innings five wicket-haul is his third at Test level.

This is a reproduction of a commissioned story for the Mumbai tabloid newspaper Mid-Day and is produced here by their kind permission.