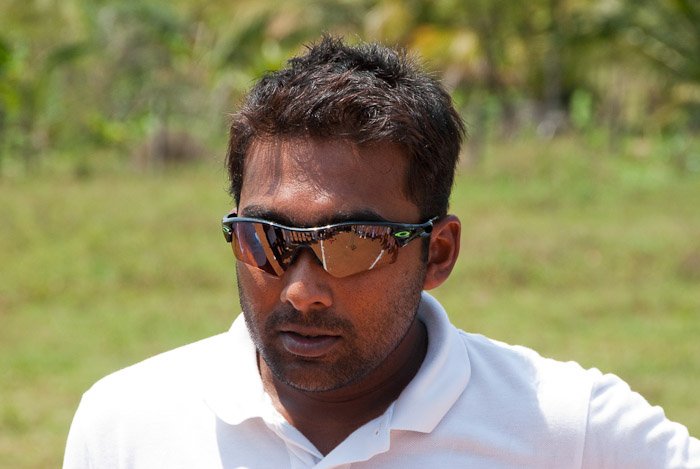 Jayawardene has long been batting out of his natural place in the order, whether domestically or internationally. He should be entrusted, as has Tendulkar with the opening berth in the 50 overs level or the T20 format where he can use his silky skills to fuller effect than having to bat at four or five. Photo: © Austin Management LTD. This image may not be copied, reproduced, published or distributed in any medium without the expressed written permission of the copyright holder.

Mahela Jayawardene may have scored a few centuries in his lifetime but the innings of 110 against Kolkata Knight Riders in that maelstrom of frenetic spectator activity, Eden Gardens, has a double message for Ashantha de Mel’s selection coterie.

Dropped, although ‘rested’ seems to be the preferred term these days, for the previous Indian Premier League game for Kings XI Punjab against Bangalore Royal Challengers in Mohali, and with the side moving on to the West Bengali capital, Kolkata, there was the impression Jayawardene had been working on his game plan to sort out a few bugs in the batting technique. It happens when you play too often in this format and where technique needs some adjustment and thinking reappraised.

It is not so much about pitch conditions but fluency and style as well as consistency; even selectors with a modicum of knowledge about the game at this high-pressured level should know this but seemingly all too often ignore the signs. As Sachin Tendulkar has regularly shown for the Mumbai Indians and India for that matter, along with South African Jacques Kallis for the Royal Challengers, there is no substitute at any level of the game for classic skills, class and consistency.

In Jayawardene’s case, his batting CV is full of such milestones but too often these are ignored by whoever is pushing whatever agenda they are pursing in the national side when it comes to batting strategy. Now closing in on 33 years, Jayawardene is at the peak of his batting powers and despite unjust criticisms, anyone with a Test and first-class batting average in the 50s is world-class.

While his ODI average is probably, even by his modest comments, ten less than he would like the current level of 32.47 to be, he still has 12 centuries at limited overs international level, supported by 52 half centuries, and for anyone looking at such statistics would, in all fairness agree they are of a modest nature for a batsman of his class. But when it comes to the shorter format, it is all about where you bat in an innings; this is especially noted in the T20 format.

Jayawardene has long been batting out of his natural place in the order, whether domestically or internationally. He should be entrusted, as has Tendulkar with the opening berth in the 50 overs level or the T20 format where he can use his silky skills to fuller effect than having to bat at four or five. It was noted last year when playing for Wayamba in the Champions League, and also in the domestic provincial T20 that he was poorly used. In the domestic final, he scored match-winning 91.

For the Kings XI on Sunday, pulled as a late replacement due to an injury to Shaun Marsh, he put together an immaculate innings of power, precision, timing and it was cricket, not the slogging you so often see: Adam Gilchrist and Matthew Hayden these days are your typical example of how such quality batsmen in their day in the Test and ODI arena are applying shots that might attract rock ‘n roll mentality environment with foolish experiments such as the mongoose bat that sounds nasty, but is unable to tame the cobra bowling tactics.

In the IPL it is all about consistency, about how players know their game and how to utilise the field as well as the conditions. Opening the batting as he did on Sunday for the Kings XI, minus the team’s personal cheerleader, the often feisty but gracious personality Preity Zinta with her charismatic smile that is not your Bollywood masquerade type features, Jayawardene worked the field as he wanted. He was in a position he is best suited for, where he could test the outfield conditions, and know what areas to hit the ball for maximum effect.

It was not all top-hand or bottom hand but clean hitting, He is a wristy player and was looking at home with what he was doing; no fancy tricks of the scoop shot, or the Marillier paddle, old-fashioned hoik in the direction of ‘cow’s corner’. He doesn’t need to indulge in such nonsense. He is scoring his runs as he best knows how, as do Tendulkar and Kallis.

Frankly, some comments about where he should bat in a slogs game are quite laughable. Because he bats at four in the Test side doesn’t mean he should do the same at this level of the game. What such views explain are that such readers, or those passing these opinions have no clue at all about the game; have not filled such positions or understand what batting styles and standards are all about. Sadly, it shows a serious pathetic ignorance of how modern cricket is played, and one where many of us point a finger at such people and wonder how such views and opinions can be treated seriously. It explains how such misplaced myopia is more of a danger than a genuine opinion; especially when they overlook the innings played this IPL by Tendulkar and Kallis, who bat at four and three for their Test teams.

Having followed Jayawardene’s career since 1995 when he first played against South Africa under24 at Bloomfield and scored a quality century in a game against an attack including Shaun Pollock and Kallis, it has been an interesting exercise in watching his development over the years, especially since living in the island from 2004. It is why, in the past three years, there is a feeling of frustration how the national selectors and team management have had him bat at four, often to the detriment of the side and mishandling the man’s batting capabilities.

It makes anyone seriously wonder whether De Mel and the rest of the selectors look at the game closely enough to realise that in Jayawardene they have the ideal opening batsman at T20 level. The problem is that focus is in the wrong area: it has been for far too long on Sanath Jayasuriya who cannot get a game for the Mumbai Indians as his hand-eye co-ordination is no longer what it was and his technique has been worked out by captains and astute bowlers who know where to bowl to get the top edge.

A good combination to open the innings for Sri Lanka in the West Indies is that of Jayawardene and Tillakaratne Dilshan, but it is unlikely to happen as the selectors are all too blinded by slogging tactics as the way to go in such events. You do not see Tendulkar and Kallis slogging or playing such gimmick improvisations. They know the dangers and the problems involved in getting the hands in the right position to play such strokes without top or bottom edging such strokes to get caught. Captains are now too streetwise to fall in to such tactics.

It is about thinking on your feet all the time, which is what cricket is about, eliminating errors and how important are fielding strategies. Anyone who watched Doug Bollinger taking the catch to get rid Yusuf Pathan the other night, when he over- balanced on the boundary, pushed the ball in the air and stepped outside to get his balance and the into the field of play to take it, is the sort of quick-thinking tactical planning that goes on. It is about being aware of a game plan and the key element here is acting calmly; the same with batting and bowling.

In 1961, during an interview with the great Sir Leonard Hutton at Leeds during an Ashes Test, he said how it is important for the game to move forward and how it had become “too slow and starchy” to attract young boys at school. He blamed coaching techniques and how these had gone backward and were too defensive. In broad Yorkshire vernacular he said the game needed a serious elbow jolt to get rid of coaching preconceptions.

Move forward to 1992, an evening in Bowral, four days before South Africa took the stage in their first World Cup, another batting technician of impressive talent in his playing days, Barry Richards said the challenge of the nineties would be to take it forward as a spectator sport and how fielding would play its role.

Since the T20 game has come on the scene, hate it or love it, the game can be used as such to redefine strokeplay, but the basics taught from an early age are important. It is why the first century by Jayawardene at this format was sheer entertainment without eschewing genuine artistry. Hopefully the Sri Lankan selectors and coaching management were watching. There was a clear message in the way he went about it and against bowlers of whom five have played internationally, including the respected Shane Bond, who the Australians have the highest regard.

As the Jayawardene detractors and deniers read these words, wishing they could have them erased, such is their own preconception, think about how Sri Lanka winning the ICC World T20 would be if he is allowed to perform with similar skill at an international arena. It is a pity, because it would be logical to have him play such an important role than those wannabe pretenders who the selectors keep pushing.

While Dilshan and Ajantha Mendis are along with Jayasuriya seen as superfluous to the needs of their IPL franchises, Farveez Maharoof has been brought back by the Delhi Daredevils with some success, more curried chicken and rice for the De Mel coterie to chew on, or is it chapattis and a curried veggie mix? Whatever, they have obviously been ignoring the IPL form and could sadly be caught out off their own false leading edge.