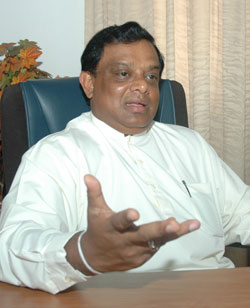 Alice (to no one in particular at the Mad Hatter’s Tea Party): “Curiouser and curiouser.”

This could even be the standard view five days after events from what was an interesting media conference at Maitland Place. The fallout has had the effect of firing a blunderbuss: a lot of noise but little genuine follow up action.

There was the new Minister of Sport, C B Rathnayake, firing rhetorical blanks after telling world cricket and the nation, what most of us have known for a long time, and that is what a corrupt bunch of fellows are those running Sri Lanka Cricket. It was finger wagging and rhetoric at its thespian, or political, best.

Only instead of the big clean up following such incendiary comments as third most corrupt institution in the country, what do we have? Why, yet another (non-elected) government ad-hoc body is placed in charge of the game, and where the board election issue is again sidestepped with obfuscating remarks. Apart from the removal of those who can be seen as little more than scapegoats of the previous ad-hoc administration, they have been replaced with no-name brand types whose cricket knowledge is suspect.

It begs the question of transparency (and accountability), as well as the professional handling of the sport when it comes to an ability to administrate fairly for all, and it should be remembered that it is not just about hosting World Cup events, Asia Cups or triangular series and tours. There is something called domestic cricket as well. Or is that seen as a minor issue by the ministry?

What the minister has done is turn a caretaker system into one that perpetuates a form of government institutionalisation of the game: one that is administered as a nepotistic autocracy, denying the club administrations and players their right to take responsibility for handling their own affairs, as they do in other countries, and without interference from bullies, through board elections.

When Rathnayake was interviewed for an international news website at the time it was suggested he was to wield the big stick regarding the interim committee. When asked, he said there were “legal issues to address” before board elections could be held and clubs reclaim their rightful administrative roles.

At last Monday’s media conference, Rathnayake, with typical political obfuscation said it wasn’t the time to hold board elections. His so-called reasoning is that the 2011 World Cup is too close to worry about such matters. He wanted more (non-elected) ad-hoc appointees from the body he labelled as corrupt in place to present the shining image of SLC to international administrators, players and guests, tourists and other visitors, while clubs are reduced to pauper status when it comes to CWC11.

Are we missing something here? Five years ago, Sanjeev Kumaratunga cited more than once “legal reasons” and corruption charges; this was repeated by Gamini Lokuge who said a report why board elections were being delayed would “soon be made”. It was all a matter of collating details.

This is like one of the many annoying ads they show ad-nauseam during televised cricket games and you miss the first ball of the next over – it becomes so boring and you know what they are saying is as transparent as the waters of Beira Lake.

Since his verbal eruption, there has been deafening silence. What are these so-called “legal issues”? What are these corruption charges levelled at the board in 2005 when it was hijacked by the ad-hoc coterie of buddies? All this seems to be a convenient excuse to tell the clubs that as they get their annual stipend to keep quiet and board elections will happen when the ministry and ad-hoc get around to it after the big show is over and not before. Until then “The boys from the ministry will run the show”.

Ask around and clubs and the word is they haven’t seen any annual audited balance sheet. Is this the reason why SLC has been labelled the third most corrupt organisation in the country? And if so, who have fattened their bank accounts.

Have the past ad-hoc committees, some who have presented themselves as grandiose SLC cabinet ministers, talked to the clubs and told them what is happening to the game as domestic level. Certainly, the one just replaced doesn’t seem to have acted in such a manner. The only legacy created by members of this non-elected government organisation so far during the past five years and two months in running the sport’s affairs is to become the third most corrupt organisation in the country.

What sort of image does that present to the international cricket community along with those who play the game on this island?

No wonder they are sniggering around the rest of the cricket world. Explaining to past colleagues and friends in several countries that as the tourist blurb suggests “A land like no other” is not far short of that fancy label. Especially when they ask how is it the promise of a sports minister to clean up a corrupt sports body fails to materialise with two senior members of the committee remain at their posts.

It results in banter along with satirical comment and justified criticism. The question to be asked here is why. And is it because ofCWC2011 that these guys want to remain at their posts and with new members strutting like pretentious peacocks with their Allen Stanford style braggadocio smirks, among the so-called elite when they arrive with their over-staffed security entourage to view games.

It would be interesting to know if such ad-hoc administrators can tell you, who was responsible for running the first World Cup and how it came to being held in the first place; who were the sponsors; also who scored the first World Cup final century and against which country. Even down to what does Law 1 of the game explain and how long has it been the first law in the game’s statute; or what year was over-arm bowling legalised.