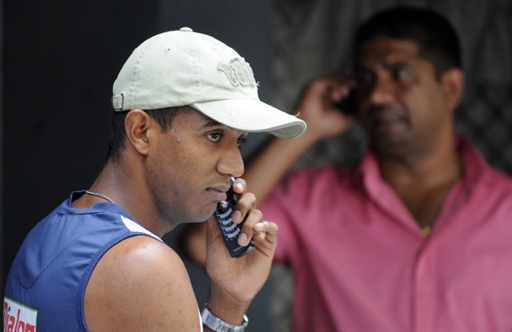 All it needed was 18 balls from Maharoof, in which he grabbed four wickets for seven runs a return of 3-1-7-4, to rip through the lower middle-order and tail to expose India and make them look decidedly vulnerable. © AFP/ Lakruwan WANNIARACHCHI.

Farveez Maharoof’s hattrick not only destroyed India at Rangiri Stadium here Tuesday. It also left Sri Lanka’s selectors with a tricky choice of whether to play the beanpole Delhi Daredevils all-rounder in Thursday’s Asia Cup final.

In the dress-rehearsal for the final, it was Maharoof’s third spell of the innings which left India with more batting concerns than Sri Lanka have had with which bowlers to consider when defending their title won in 2008 in Lahore.

All it needed was 18 balls from Maharoof, in which he grabbed four wickets for seven runs a return of 3-1-7-4, to rip through the lower middle-order and tail to expose India and make them look decidedly vulnerable. Not the sort of image to make MS Dhoni, the coach Gary Kirsten or the convener of selectors, Krish Srikkanth, smile. More likely, it would be a scowl.

As it is, Maharoof had been scheduled to tour northern Australia with Sri Lanka A squad for a series of limited overs games but fate took a hand days after that squad was announced when the old selection committee was sacked and Aravinda de Silva was installed as convener. It is his decision to recall Maharoof for this four-nations Asia Cup tournament that set up this performance. As De Silva said, Maharoof’s Dambulla record has been impressive down the years and the reason he was selected.

And you are not going to get much better figures as he ended with a five-wicket haul and in a sense resurrected his career. His hattrick is the first in an ODI by a Sri Lanka bowler since Lasith Malinga against South Africa in the West Indies three and a half-years ago.

The result was how Sri Lanka coasted to an impressive seven wickets victory against India in an Asia Cup final dress rehearsal with Kumar Sangakkara and Mahela Jayawardene doing what they know best, to bat with elegant flair and exuding charisma and style with a smile. They worked the ball into the gaps and had India struggling for answers in a third-wicket partnership of 104 that sealed India’s demise.

Sangakkara admitted at the post-match media conference how Maharoof’s five-wicket haul would lead to some discussion among the selectors that make up of the bowling attack to use for the final. They had gone into this sixth game with new bowling combinations and the pleasing aspect is how this worked in the team’s favour.

As Maharoof added, it is a matter of getting the ball in the right areas. He was a shade rusty against Pakistan, giving away 53 runs in his eight overs, after which he went to work in the nets and was prepared to show what he can do, given the chance.

Two of the three defining moments of the innings involved Maharoof: the diving catch by Sangakkara that dismissed a tentative Zaheer Khan that gave him the hattrick and the yorker that bowled Ashok Dinda.

The first important moment was when Chamara Kapugedara’s swoop on the ball and direct throw at the stumps from the point region that ran out MS Dhoni. From that point the innings was a mismatch. In a sense, India’s middle and lower-orders engineered their own downfall and became the architects of their own defeat. They had no answers to the Sri Lanka bowling combinations.

© Trevor Chesterfield/Island Cricket.
(For reasons of copyright, permission is required from the author and/or webmaster/editor of Islandcricket.lk for publication).