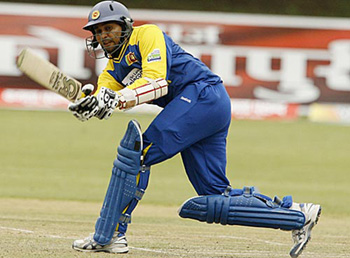 Tillakaratne Dilshan pulled together a memorable ODI Asia Cup performance when he led Sri Lanka to a facile victory of 126 runs against hapless Bangladesh at Rangiri Stadium last night.

While the result ensures defending champions Sri Lanka a place in the final next week, with the game against India still to play, Kumar Sangakkara’s side head the log with a bonus point adding to the success.

The way Dilshan was batting, with the runs flowing off the Sri Lankan all-rounder’s mercurial bat, he challenged the Bangladesh bowlers, who looked seriously out of sorts with no answer to his attacking style of play.

On a surface that was praised by Dilshan, Sri Lanka’s decision to use this outing against hapless Bangladesh as batting practice for the final meant eschewing the chance night of an innings of 400 or more in an ODI for the third time in four years.

The first was against Holland in Amstelveen on 2006, the second against India in Rajkot last year, and the way the launching pad was set here at Rangiri Stadium, by Tillakaratne Dilshan a projected total of 420 looked possible.

It looked possible as well with the runs flowing off the mercurial bat of the Sri Lanka all-rounder and Upul Tharanga, while not keeping him company and indulging in a more carefree approach he was at least batting as if under orders. This was to give the strike to Dilshan as often as possible while acting as a spectator at the non-striker’s end.

Dilshan says that he is aiming to score more than a thousand ODI runs this year. He has still some way short of the target with 608 runs. There is though the matter of 12 ODIs before the end of the year. Apart from two more games in the Asia Cup, there is the looming triangular also here in the island’s heartland.

Spread over 18 days, the tournament that also involves India and New Zealand is being held at Rangiri Stadium because of the absence of a day/night venue available in Colombo. Premadasa Stadium is being restructured for next year’s World Cup and despite the criticism of the lights here in Dambulla, it is felt the only viable facility.

Since Dilshan assumed the role as an opening batsman and adopted batting orthodoxy, he has taken over the role once filled by Sanath Jayasuriya, becoming more than an adequate replacement. His bowling has also improved and his three wickets for 37 in 10 overs in the Bangladesh innings ensured they were always under pressure.

Little wonder that he told the media conference how he is enjoying his batting at present. He went through a lean patch, coming out of it with some good scores to add to his current CV. The only reason he didn’t get a century was in turning the bat too soon, giving a leading edge to be caught and bowled by Shakib Al Hasan.

He dictated the start of the innings and was helped by the Bangladesh bowlers battling to find length and direction as well, making it easier to pick off a series of what were regulation deliveries.

As the new convener of selectors Aravinda de Silva looked out on to the floodlit scene and a game being played under lights that have drawn criticism from players and officials, Sri Lanka added a bonus point to their haul when they dismissed the weakest of the four Asian Test nations by 126 runs after dismissing them for 186 in 40.2 overs.

It is pretty ordinary at a time for as with their game against India two nights earlier, Bangladesh provided little more than a practice outing for the hosts.

© Trevor Chesterfield/Island Cricket.
(For reasons of copyright, permission is required from the author and/or webmaster/editor of Islandcricket.lk for publication).