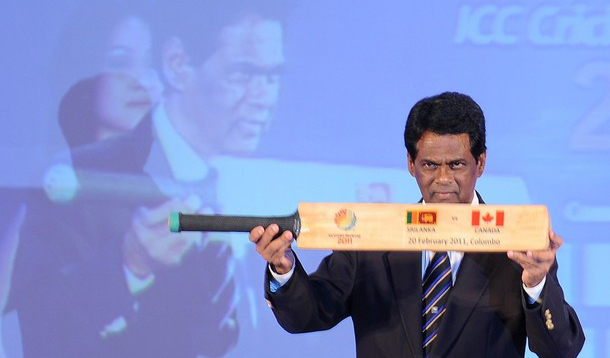 Questions are now circulating around Colombo whether any of the clubs have administrators “fit to run” Sri Lanka Cricket.

This has emerged after a former SLC official said there is an impression that “cheeky chandiyas” are now trying to cash in on next year’s World Cup by attempting to oust the current ad-hoc non-elected interim committee five months from the International Cricket Council showpiece starting February 19.

A one-time member of the interim committee said that “It is sad, but after so long, there is no one strong enough, or capable, among the club hierarchy to run the board.”

Speaking on condition of anonymity, he said that the pressure of the sports ministry by imposing an interim committee system for so long has had the effect that has often been pointed out in my Monday columns in The Island. This is how turning the SLC into a government department is killing the game at an administrative level.

There is though welcome surprise that the Supreme Court granted the United Sports Club, of Galle, the right to go ahead with their fundamental rights challenge, disputing the continuation of the non-elected interim committee. It means that the legality of Sri Lanka Cricket as a functioning body is about to be examined and those at Maitland Place are worried over certain exposure of unaudited accounts and other decisions made over the past 19 months.

“If it wasn’t such a cash cow, with big money to be made out of television deals, you would not have had this situation,” he argued. “And there has been no active development programme for the past three years. Think about it, as it is sad.”

Yet someone with links to Maitland Place, unfairly whispered last week, and without thinking, how the USC in Galle, are behaving like “The Mouse that Roared”. If they understood the times in which the hilarious 1950s Cold War spoof novel by American Leonard Wibberley was written, and why, they would had thought twice before making such a ludicrous comment trying to belittle the action of the club.

Claimants belonging to the USC (Galle) say they are treating it seriously, otherwise they would not have launched such a motion. It is though, hoped that this is a sincere effort, not one based on what can be gained from running the affairs of SLC during a World Cup year and that the game and its players, and the affairs of SLC come first as well as the longer-term development of the game.

There are though certain major ramifications involving such a challenge through the courts. The first is the need for the financial affairs of the board to be laid out in public for the first time two and a half years.

It was Arjuna Ranatunga, the World Cup winning captain when taking over in January 2008 who said the board was existing on a massive bank overdraft. He quoted figures and there was a balance sheet to support his claims. It is probably the last time that financial and audited accounts of SLC were exposed.

The most serious claim, and one that has been pointed out on more than one occasion, is that the petitioner, in this case USC, is suggesting the Sports Minister is misusing his powers by allowing the Somachandra de Silva headed interim committee to continue running SLC without a mandate from the clubs. There are other side issues as well, and one is the growth of the game at a provincial level to improve standards is one.

The club season will be on us soon and you can hear the frustration from the convener of selectors, Aravinda de Silva, over the way the domestic first-class programme is being plotted without thinking of the long-term of the first-class game.

With Kumar Sangakkara’s troupe starting their pre-World Cup planning with a tour that includes three limited-overs internationals in Australia, that side of the pre-CWC11 programme is organised. So far, we have read a lot of pre-tour rhetoric from the skipper. Just the sort of hype we had pre-India, 2009, with Sangakkara suggesting then how it was India who were under pressure. The tour became a serious bellyflop. Now he is singing a familiar tune. Australia, despite their 2-0 Test defeat on the sub-continent, will be fronting up with a squad looking at how they can defend the World Cup crown held since 1999.

As for the court case, it was Sangakkara who a month ago argued with unusual gravitas for the need to protect players and administrators. Why the need to shelter administrators been made too clear apart from it being a dirty media conspiracy. This includes the criticism of bigmouth Tillakaratne Dilshan. He still owes Suraj Randiv a public apology for his actions at Dambulla.

Perhaps he felt with all types of allegations circulating, which included match fixing to other corruption, the admin boys in Maitland Place needed looking after. Maybe he also heard the whispers from the pavilion corridors there were plans to challenge, through the courts, the authority of Sri Lanka Cricket’s entrenched Interim Committee system, now five and a half years in running the game and the current coterie being accused of corruption.

Well, as each interim committee since the duly elected democratic board was hijacked by the sports ministry in March 2005, and then those elected were ejected for charges that have as yet to be proved, there have long been accusations of in-house robbery. So what’s new? Of course, fraud on such a wide scale is the sort that will be denied, as there is so far no proof of the mishandling of affairs and seen as growing pestilence.

The court case could still set a precedent as the board accounts and decisions made without informing the public could yet reveal some shady deals with questionable administrative action.