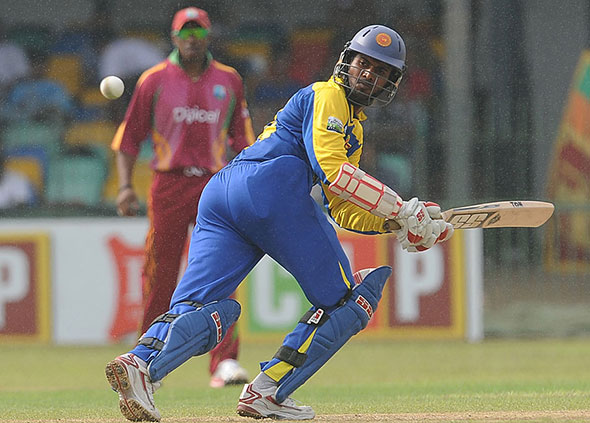 Upul Tharanga strokes the ball on the leg-side on his way to a century against the West Indies in Colombo during the second ODI played at the SSC. AFP PHOTO/Lakruwan WANNIARACHCHI.

Why the rain didn’t stay away, at least it wasn’t long enough to prevent Sri Lanka from engineering what is an impressive eight-wicket victory over the West Indies at the Sinhalese Sports Club.

Forget the jokey remarks of how many overs have been bowled since the start of the Test series in Galle back in November to this game achieve what is the first result of weather a fractured tour.

Because of the crazy Bay of Bengal weather patterns which have somehow retuned like an unwanted toothache, there was some alarm of how a disjointed tour would be further disrupted.

Well, the concerns were brushed aside in a professional manner, as the side was able to showcase their pre-World Cup form with some quality cricket. Like an out of tune orchestra seeking the right themes, the rusty edges of Monday were not so obvious and Kumar Sangakkara was able to smile when it was over.

“It is always good to win these games,” he smiled. “What is more important is how we go about winning them. How our performances went and the way we did it. And yes, we have worked hard to improve our game plan, technique and skills. I think it has shown in this game today. It was an encouraging sign.

“There was some good bowling and the way Upul Tharanga batted is what we needed, someone up front scoring big runs. It is so important someone in the top-order to play such an innings. It was a match-winning effort and he led the way, which is also encouraging.”

Winning by eight wickets with overs to spare under the Duckworth/Lewis equation, was always going to ask questions of someone such as Tharanga – scoring his ninth limited overs international century – batting through to the end. And with Mahela Jayawardene as his partner, the calming influence of the former captain (and now vice-captain), it was all so easy in the end.

It was Jayawardene punching the ball over the covers for his fifth boundary, which enabled Sri Lanka to take a 1-0 lead with Sunday’s game remaining. 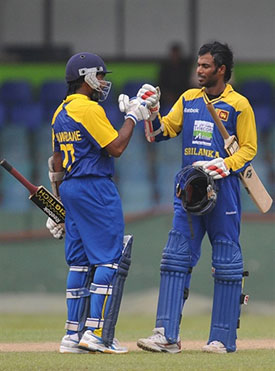 Tharanga has possibly scored his runs with more fluency and style, this time though his footwork, always suspect early on, was in harmony with his technique. He grew in confidence as the innings lasted and was not afraid to work the ball the way he did on a pitch he knows all too well. The cut that brought up his ninth century at this level is an example of the careful execution of the shot. Leaning into the stroke, his hands placing the ball into the gap for the two runs off Darren Sammy’s bowling.

Sangakkara would have been disappointed about his own dismissal; failing to get the ball in the area he wanted and too much elevation with Chris Gayle taking it easy enough. Yet how much that second-wicket partnership of 70 settled Tharanga is the import factor here as the tall left-handed Tharanga began to show more confidence as the partnership developed.

It is certain we will see more of Tharanga in the World Cup, and beyond – there is a tour of England to follow – and getting the big scores. As he showed in his 143-ball century the way he handled the West Indies bowling and put runs on the board is the sort of message Sri Lanka need pre-World Cup.

Sri Lanka were under no pressure chasing down the adjusted target, such as it was. West Indies being dismissed for 203, and losing the tenth batsman off the last ball of their innings didn’t help their cause at all. The brothers Bravo (Darren and Dwayne) may have top equal scores of 39, but as such, they failed to impress.

The sneaky run out of Ramnaresh Sarwan for 21 with the score at 94 didn’t help their cause. Sneaky? Well it happens and more often these days with batsmen backing up too far. Bravo minor thumped the delivery from Rangana Herath back at the bowler who stretching a hand to stop it – or steer it into the stumps. It happens and Bravo Major joined the younger brother in a partnership that did promise to deliver a bigger total but didn’t materialise.

In fact, West Indies after the departure of Gayle were struggling. The batting lacked the fluency of Monday, partly because of Sangakkara’s smart bowling tactics and sharper fielding.

There were questions why Sangakkara removed Lasith Malinga from the attack at such an early stage, but his tactics worked by mixing the bowling: pace and seam and on such a pitch, strokeplay wasn’t so easy. There was always pressure on the batsmen as the bowlers dominated and Malinga getting the ball to come back the way he does was too much for the tourists.

With five wickets between them for 72 runs in 20 overs, Malinga (3/30) and Nuwan Kalusekara (2/42) always had the West Indies under pressure. Herath a replacement for Ajantha Mendis, bowled tightly and supported Muttiah Muralitharan to keep the West Indies always guessing.

There will be a lot of lessons coming out of this game for both sides; for Sri Lanka, it was a far better and more polished performance and they didn’t squander their wickets and supported the bowlers in the field.

This article first appeared on Trevor Chesterfield’s column on Cricketnext.com