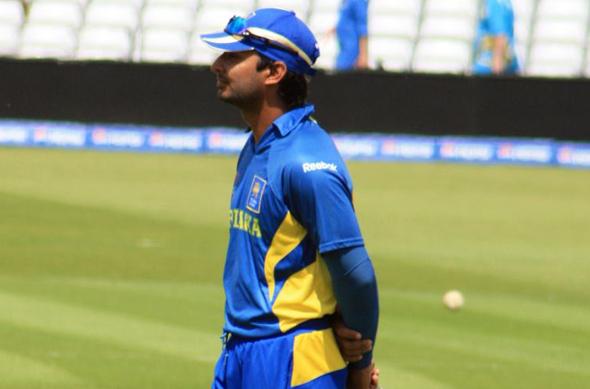 Sri Lanka’s new sports minister C. B. Rathnayake may have moved into his offices, but the word on the street and uneven pavements strewn about Maitland Place these days is not to expect any major changes in Sri Lanka Cricket administration soon.

In fact, until the end of the next World Cup, you can expect the same shabby government appointed ad-hoc run establishment running the show, after which it will be a question of watching this space, but don’t count on it. Some cosmetic changes, sure, but that is all.

And unlike certain international bodies with a little more spine, the International Cricket Council, with Sharad Pawar and his political coterie of pals around, no one is asking too many questions about who runs SLC as long as they can get their hands on the loot that goes with all the television contracts.

In fact, there is the distinct impression the clubs either don’t care anymore or have, it has been inferred, to look the other way and as no questions as they are getting a fancy dividend anyway. As one administrator from club in Reid Avenue smiled coyly the other day, “No one is going to bite the hand that feeds it, are they?”

Probably not, but there are some concerns among the handful of honourable among some club members how such once powerful institutions have lost interest in governing themselves because they are getting their annual pay packet anyway. Just as there are no annual meetings, there are neither annual reports nor audited balance sheets for the public or the clubs to check, as the interim committee is not governed by the SLC constitution and answerable to the sports minister.

Under Gamini Lokuge with his television deal with Nimbus last year, no one actually knows who earned what, apart from others than SLC profiting from that multi-million dollar deal, the only changes was akin to changing deckchairs on the Titanic. Whispers were how Jayantha Dharmadasa would be installed before the new sports minister was installed. Typical of such rumours the deckchairs in the portals of Maitland Place were not moved around.

While all this is going on at home, Sri Lanka’s first sortie in the ICC World T20 was defeat by South Africa with certain players a touch ring rusty through their performances. South Africa eased passed last year’s losing finalists by five wickets in the last over, yet if you talk to someone such as Mahela Jayawardene or Daniel Vettori, and they tell you how the T20 format is where winning a game in the last over is often a question of good tactics and often strategy – the trick being not to lose wickets in the last two overs of the game, whether batting first or second.

‘Gameplans are such that loss of a wicket means a scoring opportunity lost,’ says Vettori. ‘You have so many balls to bat through and put runs on the board and that means a lot of pressure and why going into the last five overs with the loss of only a couple of wicket adds that extra pressure if a team starts losing wickets.’

Jayawardene agreed and commented on how the pitches in the West Indies had become more spin friendly during their last tour as well as in 2007 at the World Cup. Vettori has gone on record as well, telling New Zealand television and radio how good management of spin bowling can win matches and create problems for a team batting second as the surface, already cut up, becomes more difficult to play with adjustment needed for the bounce.

As he reflected on last year’s tournament, Jayawardene, who had by then relinquished his captaincy to Kumar Sangakkara, felt the 2009 Sri Lanka side had a good balance and most knew the strict discipline needed on the field.

“In this format you cannot afford mistakes,” he said. “Yes, we did have great success in England but I don’t think we should get ahead of ourselves. This tournament is going to be another tough challenge and we need to start anew, take each game as it comes but try to go one better and win the tournament.

“I think we’ve got a really good, young and talented group of players. If we can get everyone together and perform as we did last year, our chances are pretty good,” he emphasised.

Also, judging a team on a practice match is as full of holes as the flawed Sri Lanka selection policy and as Jayawardene said, while they were quietly confident of reaching the Super Eight stages, the side had become settled in terms of this format, although he would have preferred better results.

There is though still certain controversy surrounding the final selection for which Ashantha de Mel’s panel came in for heavy criticism overlooking quality for quantity as well as Sanath Jayasuriya somehow retaining his place, despite certain objections and concerns about his form. Now a politician, the intense in-house pressure over the 40-year-old’s inclusion could yet result in unpleasant fallout with the retirement of Kumar Sangakkara from the captaincy role.

Sure Jayasuriya performed, and did so nicely in the lower echelons of the innings after the top had failed and his role as the extra spinner did much to place the squeeze on South Africa, his one for 18 in four overs is a good return and promises much if he can continue with this.

There is no denying though the experience in the Sri Lanka side, yet as it cannot be forgotten how, as with Jayasuriya, Tillakaratne Dilshan the man who piloted Sri Lanka into last year’s final, had a poor IPL season with Delhi Daredevils and like Jayasuriya failed to retain a place in the IPL franchise when it came to the final games.

Captains, it is argued, have worked out a strategy for his scoop shot and it no longer retains the element of surprise. Jayasuriya’s value as an all-rounder and third spinner to Muttiah Muralitharan and the skilled Suraj Ranjiv cannot be overlooked, as largely, Ajantha Mendis has lost his ability to be a mystery; yet stranger things have happened and he could become useful against lesser sides.

Sri Lanka’s hopes of making the final and lifting the trophy depends on so many factors, Jayawardene, when finally promoted to opening the innings, has shoved his form under the noses of the selectors, reminded them why T20 is different to 50/50 and Test cricket. It remains to be seen who will emerge from the ranks, although Dinesh Chandimal, a talented 20-year-old is one to watch if he is given the chance. Sri Lanka’s bowling will be heavily reliant on spin to upset other sides.

There will be critics of the team’s comments, but examine the scoresheet of other sides and check how many opening pairs did well in the practice games. There are still a lot of games to play in this tournament and too many Sri Lankans point fingers at records and scoresheets of practice games, forgetting it is a matter of adjustment.