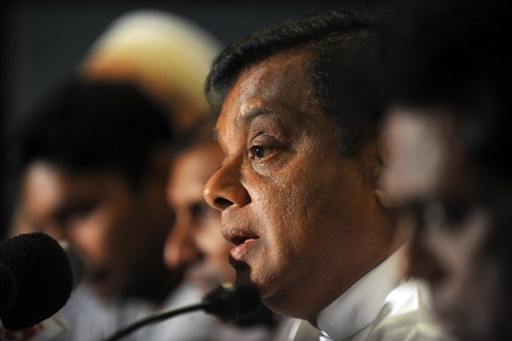 SRI LANKA, Colombo : Sri Lankan sports minister Chandrasiri Bandara Ratnayake (2 R) and chief cricket selector Aravinda de Silva (2 L) talk to reporters in Colombo on May 31, 2010. De Silva, the former vice captain of Sri Lanka’s 1996 World Cup winning team, was appointed as the new chairman of the selectors on Monday. He said he plan to groom a blend of youth and experience to form the 15-member squad for the 2011 World Cup that will be played in Sri Lanka, India and Bangladesh. AFP PHOTO/Ishara S.KODIKARA.

When the axe finally fell, the execution was swift and without ceremony. Ashantha de Mel’s discredited and beleaguered selection mafia were fired without warning by the new Minister of Sport, CB Rathanayake, who called on World Cup batting hero, Aravinda de Silva, to take over and oversee a blueprint for next year’s World Cup.

Now, nine months is about the length of time needed to produce a healthy child. Whether the De Silva led panel can achieve the same within 15 possible ODI games, begs a few questions. But you can be assured they are going to try to make their policy work, with their first job pulling together a squad for the Asia Cup tournament starting on June 15 in Dambulla.

As it is, the announcement came as a surprise on the eve of Versak and caught many unaware as Minister Rathanayake went over the heads of the members of the D S de Silva-led government appointed ad-hoc committee, known as the interim committee, to make his appointments. Sources within Sri Lanka Cricket say interim committee are upset they were not consulted by the minister over selection planning for the 2011 World Cup.

And with their contracts up for renewal, the view around the traps indicated that the chance of three of the De Mel coterie retaining their positions were not promising. Firing all four though, should not come as a surprise.

Giving sound reasons for the change and firing of the committee, Minister Rathanayake didn’t hide behind fancy words in his critical comments for the changes. His view was that they had been in the role for too long and changes were needed.

It appears a decision by selectors Don Anurasiri and Vinothen John rejecting De Mel’s request in what is a direct snub to Kumar Sangakkara’s call for Farveez Maharoof to join the squad in Florida, led to the final impasse causing the unceremonious sacking of the panel. It had been one of several decisions made by the selectors during the past year leading to mounting criticism.

In my column in The Island of Monday May 17, a subsidiary headline, “Time for De Mel to spell out if the selectors have a World Cup blueprint . . .” is known to have raised questions as well as eyebrows after Sri Lanka’s defeat by a well-disciplined England in the ICC World T20 event. It was a fair question to ask as the way the selectors had been behaving displayed a lack of professionalism. This became evident when the newsprint media slammed them for their decision to leave out Jeevantha Kulatunga, player of the domestic T20 tournament from the initial squad of 30.

Doing an urgent volte-face, yet hiding their decision with flawed rhetoric that would have embarrassed even that ace political manipulator Machiavelli, SLC were asked to approach the International Cricket Council for the squad to be increased to 31 members. What excuse SLC made to the ICC for the request can only be imagined. The fabricated insouciance the selectors issued was how Kulatunga had been a sudden inclusion on the grounds that he was cover for an injured player.

As you can imagine, this caused great hilarity in several pavilions around Colombo. The mafia had been caught in an iniquitous puddle of effluent of their making and the nauseating stench was wafting along Maitland Place and around Cinnamon Gardens and beyond. No apology offered to the batsman, just barefaced acquiescence of how someone such as Sanath Jayasuriya is to be allowed to continue with his career at the expense of others.

And when your national captain makes a direct request, and is ignored, you know that the time has come for some straight talking and honest thinking. It is Sangakkara who has to lead the side, not the coterie sitting in the comfort of their fancy A/C lounges time zones far removed from the venue where the game is being played.

Selectors allowed such draconian power to behave in such a reckless fashion places the career of good players on the line. They are dangerous to the team they are selecting and the game.

An old friend, the late Jackie McGlew, in the 1959/60 season in South Africa, sought out the convener Alan Melville, a former Test captain, elegant batsman with an impressive record and a pleasant person until it came to team selection policy. In 1991, when we joined forces to collaborate on the first edition of the icon book South Africa’s Cricket Captains (published 1994, updated in 2003), McGlew explained his frustration with Melville over the selection of certain players for the side to tour England in 1960 which he led. Among those selected was Geoff Griffin, whose action McGlew had questioned but the umpires had passed.

“Don’t worry about the selection details, Jackie,’ was Melville’s advice. ‘We will select the best side available. All you have to do is lead it.”

“I am concerned about Geoff Griffin and his action,” McGlew argued. “He has been called a couple of times and the umpires in England are not going to allow him to get away with it if they think he is infringing the law and throwing.”

“I am assured by my friends in England that their umpires will have no difficulty with him.”

It makes you smile at what were famous last words. The tour was first besieged by the horrendous Sharpeville massacre of March 21, 1960 and later the Griffin throwing affair.

The point here is that the selectors need to consult with the chosen captain to see what is needed as well as sit down with the coaching staff to map out a programme. This is what De Silva and his team will do. It is the first time that De Silva has been in this position and seven years since his retirement from the international stage.

As vice-president of SLC under Thilanga Sumathipala’s administration of 2003/2005 before the government, in April 2005, installed the ad-hoc (non-elected committee), Sri Lanka had a healthy cricket establishment with De Silva overseeing a solid coaching structure as well as bringing in John Dyson as coach. This move is seen as the start of solid building structures designed to carry the team forward.

De Silva has kept a close watch on the playing affairs side of the game, especially youth programmes where he has pursued with enthusiasm an ambitious pathways structure sponsored by Coca Cola. Involving a team of handpicked coaches, he moved into outstation schools in a venture through which quality talent has been found among lesser schools. A number of players have found their way into the national schools coaching courses and earned national under19 colours.

It has been his role as mentor that led to the following to be written in the item, “Sri Lankan selection policy playing with players careers” (May 27): “It has been recommended Aravinda de Silva be approached to help out in selection and guide their thinking and also used in a consultancy capacity as a coach. It would be a good move, but knowing the little master, he won’t move in that direction unless he has carte blanche in selection issues and coaching policy and that is highly unlikely.”

When outlining these thoughts to one of my sources within the SLC ranks over lunch last Saturday, he said this had already been suggested and surprised by my remarks. It is not being clairvoyant but looking at those who can add value to the areas of policy and change that matter, De Silva is ideal. He agreed as there are those voicing the frustrations many have felt, especially the players over the way they were being treated. Frustrated by the continuance of selection policy obstruction, Malinga Bandara and Chamida Vaas have had to go to England to show their capabilities and three, young players until today, were on the verge of retirement.

Danger signals of a destabilising selection policy, where the selectors had their pets and favouring those with lesser records as against those who have proven statistical form, and where politics had been allowed to run riot, had become a concern among clubs and in provincial circles.

This is underlined by a home record last year when beating a dysfunctional Pakistan and an injury- stricken New Zealand squad explains little in the way of improvement as Sri Lanka were well hammered by India on the subcontinent. It explains how the De Mel panel and the coaching system, with a so-called shadow operative in the structure adding little value, struggled for answers and were scared to move outside their comfort zone. Suggestions were that they had become dinosaurs in their thinking and it showed in their policies.