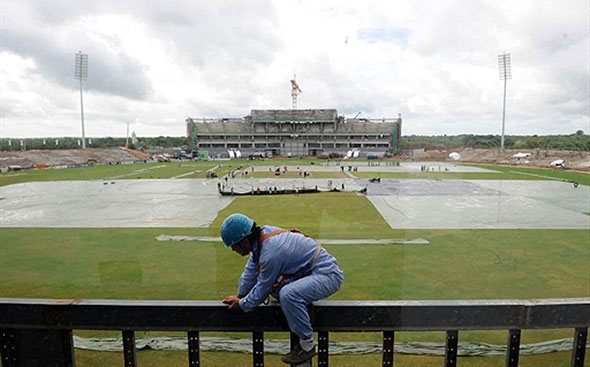 A Chinese construction worker is seen at work at the cricket Stadium in the southern district of Hambantota on December 8, 2010. AFP PHOTO/Lakruwan WANNIARACHCHI.

What an embarrassment. And Sri Lanka Cricket (SLC) cannot say they were not warned when they boasted how the three venues for the next year’s World Cup would be used for the West Indies tour.

There is a major difference though between jingoist chatter and reality. No one, however, can do anything about the rain which has hung around like the proverbial stench from the pile of metaphorical garbage on the doorstep of the government premises in Maitland Place.

What happened at Sooriyawewa, Hambantota, was an accident waiting to happen. It also defies explanation how SLC acted with Po-faced indifference at first then decided to do something about the fiasco when West Indies and Sri Lanka players kicked up a fuss trying to play a series in such a dystopian background.

If anyone at SLC had checked the Bay of Bengal weather map it would have left no doubt that the initial idea to reschedule the five-match ODI series next month would have been the most sensible solution. As it is, the three stadiums are little more at this stage than building sites. It is no way to prepare for a major event 74 days away.

Back in October, a visit to Sooriyawewa, Hambantota, gave such an impression and little has changed. At present, the stadium presents an image of an ugly concrete and steel skeleton, purporting to be the main grandstand, yet has the appearance of a futuristic model designed for a space age horror film.

All that is missing is a local version of Terminator IV swinging from the scruffy ramparts of a derelict looking edifice turning it into a macabre reincarnation of a battlestation playground for a rerun of the movie, “Return of the Nerds”.

Quite seriously this where Sri Lanka’s first World Cup 2011 game is to be played against Canada on February 20 and the looming fear here is that it is daily becoming another New Delhi in the build up to the Commonwealth Games. As the building is far from finished, the chauvinism around the game’s government run quarters of how the venue is “on track,” makes those who have seen the monstrosity up close realise how the Maitland Place cronies are living in a world of make-believe.

This has been alluded to before in these columns, but SLC, by offering a Po-faced statement telling us what we knew last Sunday, show they also believe in the tooth fairy.

It was a mix of strong objections by the West Indies players along with chaotic scenes at Sooriyawewa, which led to the realisation that playing the games at Khettarama would add to similar problems. It was still a building site and little had changed since the second Test which began three weeks ago. 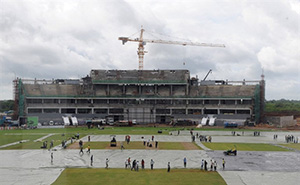 Although nothing official has been released by the West Indies team management, it is understood they have complained to their board over the arrangements for the tour in which the second and third Tests were played at two venues that resembled building sites.

Dressing rooms were found to be inadequate at Khettarama and Pallekele and that at Hambantota is far from ready. There were also temporary media centres at the three venues with the print media being made to do with what was available.

However, the Sri Lanka secretariat of the ICC CWC11 organising committee, in a panic, pressed SLC to play the games, despite the venues being two months behind schedule and the incessant rain.

It is believed the ICC are now starting to ask questions about the state of the three venues as rain continues to hamper construction. A planned promotion of Pallekele on Saturday has been delayed a week as the rain in the area has caused a major delay in finishing various sections of the stadium.

Another concern at Hambantota is how the TV company have battled to install camera equipment because part of the stadium needed for full match coverage is far from ready.

The cancellation and repositioning of the series is seen as a major embarrassment for those involved with the tour, the CWC11 planning exercise and the ICC along with presenting yet again maladministration, which after the Commonwealth Games fiasco is something it cannot afford.