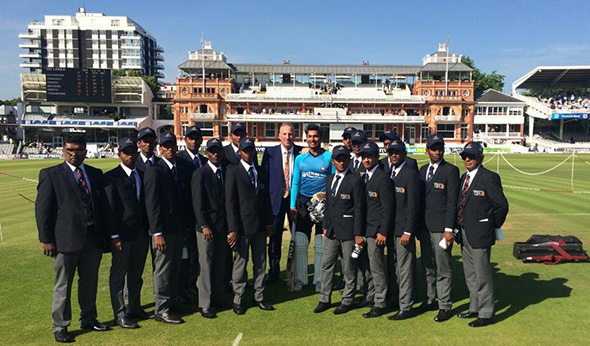 Former England captain Sir Ian Botham was pleased that a Sri Lankan youth team made-up of players from across the island won their first two matches in England. The Unity team includes seven players from northern and eastern Sri Lanka, parts devastated by a two-decade-long civil war that ended in 2009.

Botham invited a combined team consisting of schoolboy cricketers who took part in the last Murali Harmony Cup, a tournament organised by Muttiah Muralitharan’s charity the Foundation of Goodness. The Murali Cup, into its third edition, was a domestic tournament to bring about reconciliation in the island nation through cricket.

In 2012, Botham also raised funds through his charity Beefy’s Foundation through a staggering eight-day walk across Sri Lanka, which started in the former northern war zone of Kilinochchi and moved to the central highlands, through the capital Colombo, and ended in the southern coastal town of Tangalle.

The young school children from Sri Lanka today received a once-in-a-lifetime opportunity to visit the historic Lord’s cricket ground to watch their heroes take-on England in the ongoing Test match.

Organised with the kind assistance of Botham’s daughter Sarah of Sola Events, the tour has been sponsored by Sri Lankan Airlines, the Beefy Foundation, MAS, Tesco and Hameedia’s.

The British High Commissioner to Sri Lanka John Rankin hosted a farewell tea for the Unity team on June 6, prior to their departure to the United Kingdom.

"Sport is a universally unifying factor, bringing together young people who share the same dreams, aspirations and hope," Rankin said. "As they head off to the UK, the Unity team will discover that they have much in common with their British counterparts. Youth to youth contacts like this are the future of UK-Sri Lanka relations. I wish the team all the very best on their tour."

The British High Commissioner to Sri Lanka John Rankin hosted the team before their departure. © FOG

The 14-member squad is captained by all-rounder Janith Liyanage from St. Peter’s College and vice-captain is Paramanatham Thuvarakaseelan from St. John’s Jaffna.