July 2, 2011 (Island Cricket): Amid allegations of corruption and financial mismanagement, Sri Lanka’s sports minister has appointed a new interim committee to replace the previous interim committee. But the minister has promised that this committee will be true to its name and be a temporary measure until elections are carried out next year.

“The earlier board wanted to resign soon after the World Cup, but we asked them to stay until the ongoing England cricket tour.

“We will go for election in the first half of next year.”

The former chairman of Sri Lanka Cricket (known previously as the Board of Control for Cricket in Sri Lanka) Upali Dharmadasa has been named as the head of the new committee, while former interim committee member from 2005-2007 Prakash Schaffter has been named as secretary.

Sidath Wettimuny and the assistant treasurer of the 2002 interim committee Nimal Perera have also been included as members of the new committee.

“We need to create a proper background. I know the mafia in the sport and we need to rescue the game,” Aluthgamage replied, when asked why he did not extend the term of the previous committee, headed by chairman Somachandra de Silva and secretary Nishantha Ranatunga, until the election in 2012.

Aluthgamage also admitted that Sri Lanka Cricket (SLC) was facing a crisis, as a result of the previous committee’s handling of the ICC Cricket World Cup 2011 tournament, which Sri Lanka co-hosted.

“One of the main tasks is to keep an eye on the finances. We are in a financial crisis after the World Cup,” he said.

“We spent more than we budgeted for.”

SLC are now faced with a US $69 million debt, which has crippled the island’s cricket board and left it unable to pay staff salaries or private contractors, the Sri Lankan media reported last month.

According to Aluthgamage, the government bailout sought by SLC will help.

“The SLC cash problem will hopefully ease a bit when we shortly get a government grant and a government loan,” the minister said.

Meanwhile, the International Cricket Council (ICC) said on Wednesday that it would probe the handling of World Cup ticket sales and the construction of new stadia.

SLC has been accused by cricket fans and the local media of not effectively overseeing the sale of tickets, allowing thousands of tickets to fall in the hands of scalpers, acquaintances and family members of SLC officials. Reports state that several thousand World Cup tickets are unaccounted for in Sri Lanka, resulting in another colossal loss of revenue for the cash-strapped SLC.

Amid these allegations, computer hard drives containing financial data relating to World Cup ticket sales have been stolen from SLC offices in Colombo. The police are yet to find the culprits.

In March this year, a Sri Lankan newspaper alleged that the nephew of the sacked interim committee chairman de Silva was involved in a World Cup ticket scandal.

“The cricket chief, in the lead up to the ICC Cricket World Cup, appointed two of his nephews Suraj and Kapila Dandeniya for lucrative salaries (US$ 5000 a month and US$ 2500 a month) to function at the World Cup secretariat. Now, the employees of the cricket board seem to be rising against one of them,” Sri Lanka’s The Island newspaper reported in March.

“The conduct of Kapila Dandeniya, who was in-charge of distribution of complementary tickets during the tournament, has come in for criticism and scrutiny after Tuesday’s semi-final clash between Sri Lanka and New Zealand at R. Premadasa Stadium.

“However, at around 2:30pm on the day of the semi-final, Kapila Dandeniya is alleged to have confiscated the tickets meant for those who had purchased tickets through the internet,” the report added. 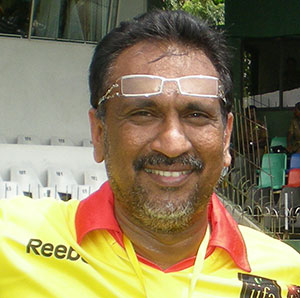 The Sri Lankan media has highlighted several similar instances of improper professional conduct and mismanagement under the tenure of de Silva’s interim committee, including the number of non-essential flights out of the country taken by the secretary Ranatunga. But Sri Lanka’s sports minister has failed to carry out any investigation.

In May, however, the parliamentary Committee on Public Enterprises (COPE) launched a probe.

“We have asked the SLC to appear before COPE and answer allegations of discrepancies in its accounts, misappropriation of funds and other irregularities,” COPE chairman minister D.E.W. Gunasekara told the Sri Lankan newspaper Daily Mirror.

“The Auditor General has been asked to make available to COPE all documents pertaining to SLC transactions and payments.

“This is the first time COPE has summoned the SLC for an inquiry. The impression in the past was that COPE had no power to probe SLC activities, but our legal advisors have said COPE has constitutional power to investigate the SLC.”

It is unclear, at this time, if any officials from the previous interim committee will be held accountable after their sacking.