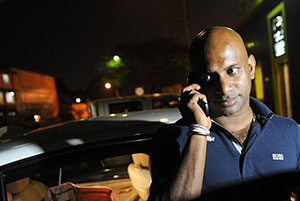 Sanath Jayasuriya’s advice helps youngster get back on track
By Desmond Samith | April 29, 2013

Twenty-year-old Yashoda Lanka was sweating it out at the Khettarama gym. Like many youngsters of his day, he wanted to have a puffed up chest and two inflated biceps. He had another reason for his daily visits to the gym — to forget his recent past.

Lanka had started well as a batsman at his school Richmond College in Galle, and was showing a lot of promise when playing for Sri Lanka under-17 and under-19. However, the 2012 premier club season proved disastrous for him, as he managed just 80 runs in four matches for Badureliya CC. His cricketing dream was coming to an abrupt end and self-doubt had begun creeping in. In short, his life was taking a chaotic turn. The treadmills, weights, bars and weight benches were providing him a welcome distraction and time away from cricket.

One day, the unexpected happened. Sanath Jayasuriya saw the youngster at the gym.

"What are you doing here," thundered Jayasuriya. "Get back to the nets, work on your batting."

Jayasuriya got the youngster to work with Anusha Samaranayake, a bowling coach who is fast making a name for himself as a good motivator of batsmen. The rest, as they say, is history.

In this year’s premier first-class tournament, Lanka amassed 802 runs in nine matches playing for Air Force Sports Club, and ended up as the third-highest run-getter behind SSC’s Kaushal Silva who made 1073 runs, and Bloomfield’s Madawa Warnapura who made 804 runs.

Lanka hit three centuries and three half-centuries, with a highest of 171 against Colts and averaged 53.46 with the bat. He also clobbered 66 fours and 43 sixes. His ability to hit sixes was quite evident, as he finished the season with the most number of sixes.

"I was thinking of giving it all up before Jayasuriya sir talked to me," Lanka recalled. "The runs were not coming and I was not getting enough chances, so I thought I was on the wrong track. My parents who were right behind me all along were worried too."

The right-handed batsman trained with Samaranayake everyday for nearly three months before the start of the season. The coach made some adjustments in the young batsman’s stance, his footwork and his mindset.

"I found his tips useful. I worked really hard, and my approach to batting changed," Lanka said. "Soon, things started getting better — runs started coming, my confidence levels got better and better with the progress of the tournament."

Lanka loves to hit the ball hard. He is not overawed by big-name bowlers. The chance he got to bat up the order for Air Force too has helped him.

Although he was a left-arm medium pacer in his school days, Lanka has also tried a bit of left-arm spin in the premier tournament.

Jayasuriya, the chairman of selectors now, is impressed with the progress shown by the youngster. On the eve of the Twenty20 game against Bangladesh at Pallekele last month, Jayasuriya asked a journalist who was complaining about the non-inclusion of some youngsters in the squad to have a look at players like Lanka.

During his time with the Sri Lanka under-19 team Lanka shot to fame after bludgeoning 213 runs against a visiting England under-19 side.

Lanka never hesitates to thank coaches who have helped him in the past, and among them are Roger Wijesuriya, Naveed Navaz, Sumithra Warnakulasuriya and Romesh Kaluwitharana.

Like any youngster his age,  Lanka likes to listen to music when he is not holding a bat and idolises two all-rounders — Australia’s Shane Watson and South Africa’s Jacques Kallis.