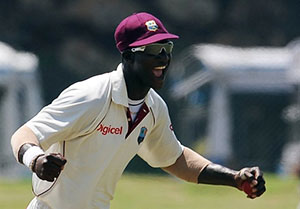 November 30, 2010 (Island Cricket): Darren Sammy has been retained as skipper for the West Indies’ ODI squad for their five-match ODI series and solitary T20 match against Sri Lanka starting next month.

Barbadian batsman Kirk Edwards has received a maiden call up to the West Indies squad. The right handed Edwards is one of four players who will join the squad presently playing in the three match Test Series.

Darren Sammy, appointed Test captain prior to the tour of Sri Lanka, has been appointed leader for the Limited Overs side as well.

Andre Russell, the Jamaican fast bowling all rounder who is currently on tour also gets his maiden Limited Overs selection.

Courtney Browne, the WICB Selector on tour noted: “This will be a very important Series for us as we look ahead to the ICC Cricket World Cup, which will be played in the sub-continent in a few months. These are the last ODIs before the World Cup, so we expect the players to make the most of the opportunities. We are confident the team will do well.”

*The Vice Captain has not yet been named.

With inputs from WICB press release.