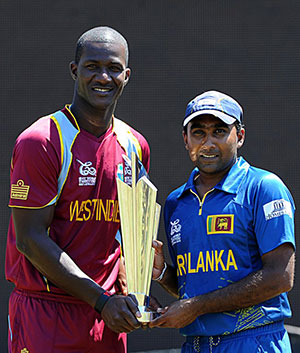 If you’ve been to Sri Lanka, you’ll know that there are few nicer people than them. And if you happen to know people from the Caribbean, you also realise that few are as full of life as they are. In more ways, the WT20 final today is also a battle between nations that have produced the most natural of bowlers over the past decade and another that has produced the most natural T20 players in the format’s brief history.

Pundits and fans of the West Indies think their captain Darren Sammy is a liability, and is taking up the place of Andre Russell or Dwayne Smith, while some think he has managed to keep the team together through tough waters. On the other hand, the brilliant Mahela Jayawardene has manoeuvred his team well and made inspirational selections and brilliant on-field decisions. That he is yet to commit to a long tenure as captain tells of issues beyond his control though.

Cricket, off the field, has been eventful for both finalists over the last few years.

Whilst West Indies have made as much news for their Gangnam dance moves on the field, just as they have for partying in their hotel rooms, their form coming in to the finals will be worrisome for Sri Lanka. Not much seems impossible for their batting when they click as a unit.

It is apparent that Chris Gayle is the leader of these men, with his contributions in playing the anchor and the grenade launcher, switching back and forth with the same ease he breaks in to his various celebratory dance moves. It was apparent when Marlon Samuels bowled the Super Over against New Zealand ahead of Sunil Narine, that he had the final say in the on-field meeting with Sammy.

It would be daft to think that merely getting Gayle out early would seal the victory for the hosts. Gayle perhaps has been the reason Johnson Charles, Samuels, Dwayne Bravo and Kieron Pollard have contributed immensely in tough situations. However, West Indies, along with Sri Lanka, seem to have the team covered for all situations and conditions, including having the best answers for Super Over situations.

The wickets have slowed down, aiding spinners and clever medium pacers who favour the cunning. Expect Jayawardene to throw surprises at the West Indies with team selection and bowling changes. His ‘horses for courses’ team selection has proved to be inspiring, be it picking Herath in the semifinals over Dhanajaya or opening the bowling with Angelo Mathews.

It has been a tournament where most things have gone well for Jayawardene, barring the loss to South Africa at Hambantota. His batting will still hold the key for his team; his improvisation when batting under pressure and on difficult tracks is admirable. Twice in a span of 18 months he has played champion knocks when it mattered most for his team.

Also, Jayawardene often diverts from a pre-determined plan on instinct. It is this aspect of his cricket that Sri Lanka seems to have benefited the most from, with him back at the helm after Tillakaratne Dilshan stepped down.

It is, of course, silly to pin the credit of his team’s entire success on Jayawardene alone, for his troops stand by him and deliver, and in Kumar Sangakkara he has an able ally in implementing his various plans. But it must also not be forgotten that he seems to be the type to go out of his way to pick the players he wants: Dananjaya being a point in case. Nor did he seem hesitant to pick Herath over Danajaya, given Herath’s success over Pakistan in Test cricket, and the captain’s opinion that Pakistan had difficulties against left-arm spin proved true. His inspired selection proved to be a differentiating factor in the end. The very promising Dinesh Chandimal has not feature in the captain’s scheme of things in this World Cup, which can tell you a lot about the thinking behind the team’s success.

Often, in this part of the world, it is the captain who takes the blame when things go awry, and often it is a very fine line between being inspirational and being insipid. Jayawardene duly deserves praise for being inventive and bold. Long may his instincts serve his nation as its captain.

As the two best teams in this tournament square-off on Sunday, it may boil down to a battle of wits at the end. And Jayawardene should fancy his chances of getting his hands around ICC silverware at long last.