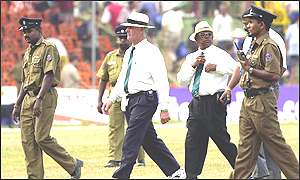 When it comes to Test cricket between England and Sri Lanka, the wins at the Oval in 1998 and at Trent Bridge in 2006 are moments that Sri Lankans will obviously remember. Another series that is vivid in the memories of both British and Sri Lankan supporters, for the wrong reasons, is England’s tour of the island in 2001 – their first ever three Test series against the Sri Lankans.

Prior to the series, the talk was on how England will counter off-spinner Muttiah Muralitharan. A resurgent England, who were fresh from a series win in Pakistan, had developed a unique theory that revolved around ‘hit him or kick him’. The tourists adopted the strategy of padding away Muralitharan’s deliveries which didn’t pose the risk of them being ruled out leg before wicket.

The umpiring was horrendous. Peter Manuel ruled Alec Stewart out leg before wicket to Sanath Jayasuriya to a delivery that pitched a foot outside the leg-stump. The British press accused Manuel of favouring the home team despite Sri Lanka beating England by an innings in the first Test.

The big runs deserted the Sri Lankan batsmen in the next two Tests and there were several heated moments, particularly in the second Test at Asgiriya where one of the umpires was BC Cooray.

The acrimony started much before the first Test. In the first tour game at Moratuwa, Darren Gough was reported for abusive language. Then in Matara, Ruchira Perera’s comments to Craig White after the all-rounder played and missed was interpreted as a racial slur. Those who knew Ruchira were aware that he couldn’t think that deep to come up with a sledge of that magnitude.

At Kurunegala, during another warm-up game, Gough was seen wagging his finger at an umpire.

Things then went from bad to worse when umpire Cooray gave Jayasuriya out, caught at gully by Graham Thorpe. It was clear to most at the ground, other than the umpires, that it was a bump ball. Jayasuriya reacted angrily by throwing away his helmet and gloves on his way to the dressing room, and was handed a suspended sentence by former Indian star-batsman and match referee Hanumant Singh.

Former captain Michael Atherton greeted the aggressive Kumar Sangakkara by calling him a cheat when he came into bat in Kandy and the Sri Lankan, who is never short for words, reminded Atherton of the ‘dirt in the pocket incident’ and a finger-wag by Atherton followed. Both players were reprimanded by the match referee.

The following day, there were banners at Asgiriya suggesting that a visa was ready for umpire Cooray at the British High Commission for him to travel to England. The umpire had to be provided a police escort and Cooray, a reputed banker, ended his career following that game.

The two captains Jayasuriya and Nasser Hussein met prior to the SSC Test and decided that they would take more responsibility for the actions of their teammates.

Sri Lanka had been the firm favourites prior to the series, especially given the fact that Muralitharan had bamboozled them in their own backyard when the teams met the last time in a one off Test in 1998. However, England created enough pressure and caught Sri Lanka off guard. The weight of expectation was such, that Sri Lanka cracked under intense pressure and were bowled out for 81 runs, inside 29 overs, leaving England a victory target of 74 runs. The tourist were made to work extremely hard for each run and eventually they recorded a thrilling four wicket win, as Graham Thorpe showed a calm head in guiding England through.