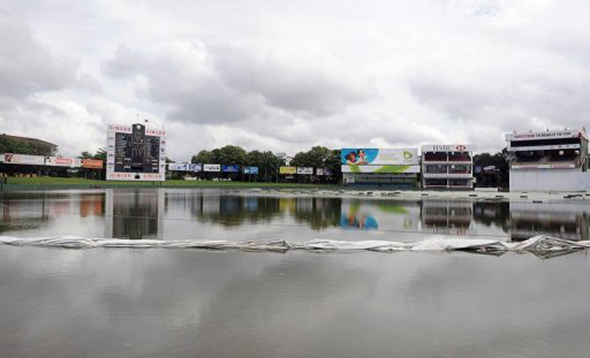 Heavy rains submerged the SSC outfield resulting in the cancellation of the Windies’ only warm up match. AFP PHOTO/Lakruwan WANNIARACHCHI.

November 12, 2010 (Island Cricket): Inclement weather has led to play being called off without a ball being bowled on the third and final day of the warm up match between the touring West Indies and the Sri Lanka Cricket President’s XI at the Sinhalese Sports Club (SSC) ground in Colombo.

Colombo has experienced the heaviest rains in 18 years resulting in flooding in many parts of the bustling city.

The outfield at the SSC ground was "too soggy to play," according to Sri Lanka Cricket’s Media Manager Brian Thomas who spoke to AFP earlier today.

With their only practise match washed out with just a day’s play possible, the tourist will now head to Galle for the first Test starting November 15.