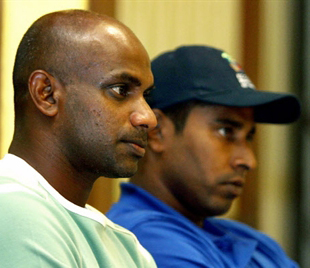 September 18, 2010 (islandcricket.lk): Chaminda Vaas and Sanath Jayasuriya have been included in national training sessions ahead of Sri Lanka’s tour to Australia.

Sri Lanka kick of their tour to Australia with a Twenty20 fixture on October 31 which will then be followed by three ODIs.

"I am happy that they invited me to train with the rest of the lads, but, nothing is finalized yet. The squad proper for the tour may be selected later on,”  Vaas told The Sunday Times in Sri Lanka.

Vaas, who last represented Sri Lanka in 2008, had a memorable outing for Northamptonshire in the 2010 Friends Provident T20. Sent up the order to open batting, Vaas scored 412 runs for the Steelbacks and also scalped 23 wickets.

“Yes, they are training with the national squad at present, but, nothing is finalised. We do need some bowlers also at the nets and as there aren’t any club practices on, it is good that they too can find the time to train here. We will be selecting the pool proper only on or about next Sunday," the Chairman of Selectors, Aravinda de Silva said confirming the duos presence in the training sessions.

Both members of Sri Lanka’s 1996 World Cup winning team, Jayasuriya and Vaas, have expressed their desire to bid farewell to all forms of cricket after the 2011 World Cup.