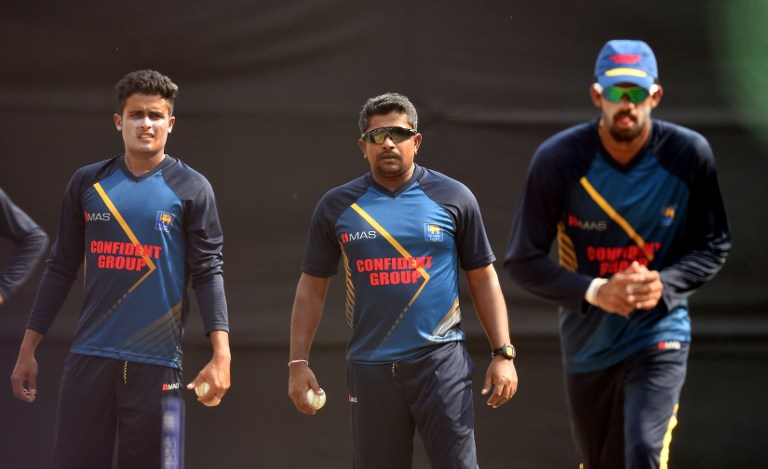 Sri Lanka will hope that their spinners, led by veteran Rangana Herath, can help them topple the Australians. © AFP PHOTO

Sri Lanka face an arduous task when they host the number-one ranked Test side Australia in a full tour starting on July 26. The tour consists of three Tests, five ODIs and two T20Is.

Australia will be awarded the Test Championship Mace, along with a $1 million winner's prize, at the start of the tour in recognition of their ascent to the top of the Test match rankings. Sri Lanka, by contrast, are coming off the back of a haphazard tour of England, where they lost the Test series 2-0, before losing the ODI series and the sole T20I by eight wickets.

On Sri Lanka's previous tour of England in 2014, the team completed an unprecedented 1-0 win with a drawn Test at Lord's and victory at Headingley with two balls to spare, but at that point Sri Lanka had the services of their two senior stalwarts, Kumar Sangakarra and Mahela Jayawardene, and their captain Angelo Mathews was in fine form; his 160 leading Sri Lanka from the brink of defeat to a famous triumph in the second Test.

Now, with their two talismans retired and Mathews struggling to keep the team afloat, even Sri Lanka's record-breaking spinner Muttiah Muralitharan predicts the home side will have some difficulty in overcoming the Australians.

"Australia is favourite at the moment because they have played good cricket in the recent past," Muralitharan said. "Sri Lanka, on the other hand, are struggling a bit in all forms of the game, so Australia will have an edge over them."

Muraliatharan also added that he does not think Sri Lanka can beat the Australians whilst they are in the midst of rebuilding their side.

"They have a chance of winning this series because the Sri Lankan side is very inexperienced, as a lot of players retired recently and they are rebuilding the side, so they won't be strong enough.

"Therefore, I think Australia will have a good chance of winning the series. If they use the conditions properly and play their spinners well, they definitely have a chance."

Australia have brought in the expertise of Thilan Samaraweera to help their batsmen adjust to Sri Lankan conditions, where the pitches are generally slow, dry and conducive to spin. Samaraweera is a retired veteran of 81 Tests for Sri Lanka, during which he scored over 5000 runs and averaged 53 at home.

The last time Australia and Sri Lanka contested a series in the long-form of the game, Australia won 3-0 at home, whilst the previous occasion the Aussies toured Sri Lanka in 2011, they notched up a 1-0 victory with two drawn Tests. Veteran batsman Mike Hussey was in stellar form on both occasions and chose the home series as his swansong from international cricket.

If Sri Lanka are to spring a surprise over their visitors and pull off a win, there must be more than just skipper Mathews stepping up for the team. Middle order batsman Lahiru Thirimanne has promised much over a number of years, but is yet to deliver consistently in the Test match format.     Dinesh Chandimal must rediscover the spark that allowed him to engineer a remarkable come from behind win in Galle last year against Sri Lanka's arch-rivals India, with his match winning knock of 162 in a team total of 367 during the second innings.

If Sri Lanka have anything going for them, it is a hard-working and persistent bowling attack that specialise in tiring opposition batsmen out with consistent lines and lengths, and the occasional burst of fiery fast bowling from the likes of pacemen Dushmantha Chameera and Nuwan Pradeep.

Sri Lanka's main threat to the Australians is the wily Rangana Herath, a spinner who revels in the dry home conditions of Sri Lanka.

The home fans will be hoping for a much improved showing from their team, whilst Australia would like to continue their recent dominance of the Sri Lankans and further demonstrate  the performances that have led them to the No.1 Test ranking.