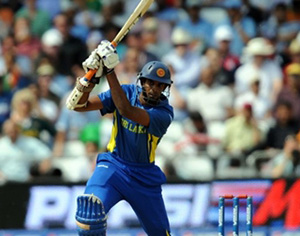 No Lasith Malinga, who has chosen to represent Mumbai Indians. No Tillakaratne Dilshan either, personal issues being the reason. But Southern Express, Sri Lankan representatives in the Champions League Twenty20 qualifiers starting in Raipur on Saturday, are still pretty gung-ho about their chances against Mumbai Indians, Northern Knights and Lahore Lions.

"We are a lesser known opposition; the oppositions are not very aware of our strengths and weaknesses, and that’s going to be our advantage, going in as underdogs in this tournament," pointed out Jehan Mubarak, the captain, on Thursday.

Many of the regular players in the team — Danushka Gunatilake, Ishan Jayaratne, Sachith Pathirana and Charith Jayampathi — have no international experience, while Mubarak and Farveez Maharoof have been in and out of the Sri Lanka team since making their debuts over a decade ago and qualify as senior statesmen now. Seekkuge Prasanna, Niroshan Dickwella, Kusal Perera and Dilruwan Perera are really the only ones in the squad with proper current international statuses.

Up against them are three teams with a plethora of big names, which must make Southern Express’s job that much tougher.

"Most players have international exposure, have played for the national side or been with the Sri Lanka A and the Sri Lankan T20 sides," argued Shane Fernando, the team’s manager.

"We have two-three youngsters who are also very talented, which you will see in this tournament. We are ready."

The strength of the team is very much its batting, and Mubarak accepted that.

"With Kusal Perera and Danushka … Seekkuge Prasanna in the middle, who can clear the boundaries with Farveez Maharoof, and Angelo Perera, we will be looking to put up the scores," said Mubarak.

"Sachith Pathirana basically got us here by bowling the final over in the Super 4s tournament at home. Lasith’s absence is going to hurt us a bit, but we have got back-up bowlers Ishan Jayaratne and Charith Jayampathi. Plus, with Farveez’s experience, I think with runs on the board we have the bowling to back it up."

Naveed Nawaz, the coach, said it could be the youngsters rather than the established names that are likely to make a difference.

"It was a good tournament (Super 4s) we played back home," he said. "All the games had very close finishes and in the final, as Jehan said, we had a few boys who contributed to get us into match-winning situations."

Mumbai will be without Rohit Sharma, their captain and star batsman. Mubarak contended that teams don’t rely on big-name players any more, and Southern Express wouldn’t be lesser than any of their opponents.

"I think in Rohit’s absence, they will certainly find players to fill that slot," Mubarak said. "I don’t think teams nowadays, whether it is international teams or domestic teams, rely on one or two players. Teams have four-five good batsmen and four-five good bowlers.

"With every opposition, we analyse the batting and bowling strengths and weakness and who we should use in which situation."

On September 13, Southern Express will play their first match of the qualifiers against Northern Knights, a 4pm start, while Mumbai Indians and Lahore Lions face off in the second qualifier of the day at 8pm.