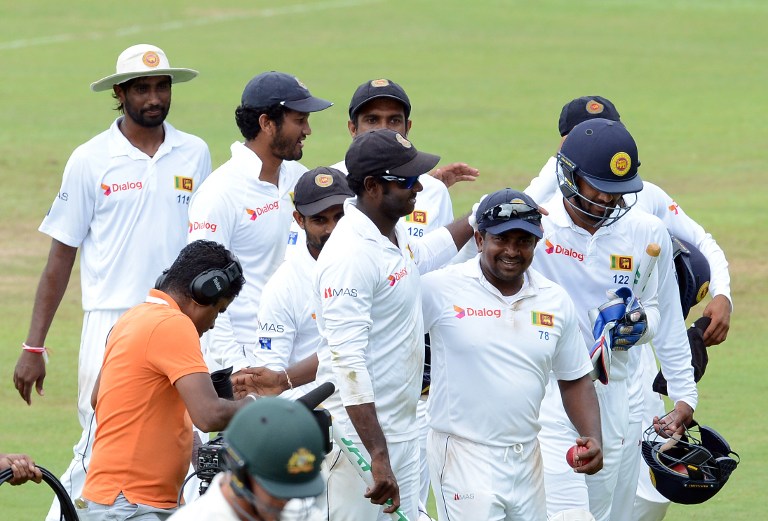 Sri Lankan players walk off the field after their victory in Pallekele. © AFP

Sri Lanka wrapped up a 106-run victory in the opening Test of the three-match series against Australia, claiming seven wickets on the fifth and final day at Pallekele.

Once again Rangana Herath was the chief destroyer with 5-54, and he was ably supported by debutant Lakshan Sandakan with 3-49. It was another debutant though, Dhananjaya de Silva, who broke the partnership that threatened to see Australia through to the safety of a draw.

After Nathan Lyon was dismissed in the 56th over of the innings, the injured Steve O'Keefe and wicket-keeper Peter Nevill batted for just short of 30 overs, before de Silva induced an edge from the bat of Nevill to bring Sri Lanka on the brink of a famous win.

Australia resumed play on day five with their score on 83/3, still needing a further 185 runs for victory. Adam Voges and Steve Smith saw off about an hour's play after a rain-delayed start, but Voges was caught-and-bowled by Herath for 12.

Smith and Mitchell Marsh seemed admirably undeterred, adding a brisk 43, but Marsh fell LBW to Herath for 25. The Australians were 139/6 and from there the slide began.

Australia's skipper Smith was ruled LBW just one run later, and whilst he opted for the review, one could see in his grimaced expression that it was a review more in hope than anything else. Indeed, he was halfway off the ground when his fate was sealed.

Starc fell to Sandakan for a duck on the verge of the lunch break, to put Sri Lanka well on top with the score suddenly 140/7, but it was not smooth sailing for the hosts thereafter.

Nathan Lyon and Nevill negotiated a further five overs after lunch before Lyon fell LBW to Sandakan for eight despite a review. But it was then that Sri Lanka's toughest period of the day began. For what seemed like eternity, they plugged away at the Australian tail, trying to prise out the ninth-wicket partnership of Nevill and O'Keefe, but they would not budge.

Although they only added a mere four runs, Nevill and O'Keefe ate up nearly 30 overs, as the small but vocal crowd grew increasingly nervous. Off-spinner de Silva then induced a false stroke from Nevill as he tried to cut the ball but only succeeded in getting an outside edge into the grateful hands of Dinesh Chandimal.

After that, it seemed like only a matter of time before the match was wrapped up, such was the confidence of the Sri Lankan fielders around the bat. And when Herath got one through the gate of O'Keefe to disturb his stumps after a 98-ball stay, Sri Lanka's sensational win was complete.

Sri Lanka had toiled long and hard for this victory after being bowled out for a mere 117 on the first day. Herath and Sandakan brought them back into the contest on day two by bowling Australia out for 203, before Kusal Mendis, allied with Chandimal and de Silva, put them in front on day three. On the final two days, it was Herath and Sandakan who again did the damage, beating the constant threat of rain to complete a stunning comeback, as the No. 7 ranked Sri Lanka beat the top-ranked Test team in the world.