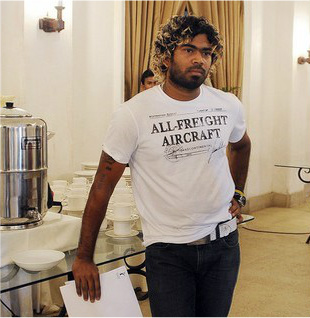 Sri Lanka’s sports minister Mahindananda Aluthgamage said that his ministry will impose a ban on athletes who do not sign contracts with national sport bodies.

The minister referred to Lasith Malinga as the reason for this new policy.

"I am a great follower of fast bowler Lasith Malinga but that does not mean that I condone all his actions," Aluthgamage told Sri Lanka’s Sunday Times newspaper.

"We have taken the cue from Malinga. In future, if sportspersons who are performing at national level fail to sign their central contracts with their specific sports bodies we will slap a two-year ban on them."

"This is a trend that we must nip in the bud. I find fault with the administrators for not getting tough on the players," the minister added.

"For instance, in the contract it is stipulated that a cricketer must be in the country at least two weeks prior to a tour. But, most of the cricketers who were engaged in the IPL returned to the island only a few days before the Pakistan tour. Yet, the SLC officials have not taken any action against anyone. As I understand, most of them still even have not signed their central contracts. That’s bad.

“However, in the future, sportspersons engaged in any discipline at national level and do not sign the central contract will face the two-year ban."

Sri Lanka Cricket (SLC) cannot present new contracts to players this year, as they have been unable to honour contract payments from the previous contract period. The dire financial crisis at SLC has meant that the cricket board still owes players several months in back pay.

Aluthgamage is yet to initiate any investigation into the conduct of government-appointed cricket board officials who left SLC in nearly US$ 70 million in debt after co-hosting the World Cup last year.

Furthermore, the cricket board also earns a significant sum from their Indian counterparts for allowing Sri Lankan players to participate in India’s T20 tournament – the IPL.

Interestingly, Malinga told Island Cricket in April that the Sri Lankan media, who claimed he had refused to sign a contract, had got it wrong. According to the Sri Lankan paceman, he has not been offered a contract to refuse.

"No contracts have been offered yet for this year for any of the players," Malinga said.

"But whether I decide to play with or without [a] contract, does not really matter as I am still 100-percent available for selection for all ODI and T20 commitments for Sri Lanka just like I was last year."

Although there was no outcry or opposition from Sri Lankan journalists, the sports ministry or SLC officials last year; Malinga played as a non-contracted player from March 2011 to February 2012.

In addition, SLC intends on introducing a clause in their new contracts that prevents non-contracted players from using any of SLC facilities, including SLC-owned gyms and nets.