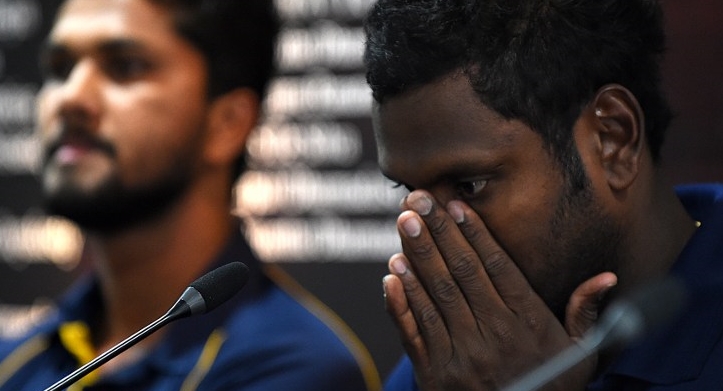 Skipper Angelo Mathews will have a tough task on his hands to turn things around when Sri Lanka play England later this month. © AFP PHOTO

Sri Lanka are going through a "transition period" and players will need to be given more time to settle, Muttiah Muralitharan has said in a recent interview, while former captain Mahela Jayawardene has suggested that Sri Lanka's slump is a result of poor planning by selectors and administrators.

Muralitharan is in India currently working as the mentor and bowling coach for Sunrisers Hyderabad in the ongoing Indian Premier League.

"I feel we are undergoing a transition period at the moment," Muralitharan told the Times News Network, when asked to comment on the current state of Sri Lankan cricket.

"It is important for us to be patient with the players and give them time to settle in the side. I feel we have the potential to be among the top teams in the world, but it will take some time."

Former captain Mahela Jayawardene believes the lack of proper planning by Sri Lanka Cricket officials is to blame for the team's slump since the retirements of senior players, such as himself and Kumar Sangakkara.

"It is an easy thing to say that the Sri Lankan team is going through a transition, but I think if you are an international team and if the management had really put the right thoughts and process[es] into play, we would have been better," Jayawardene told Gulf News.

"Everyone knew that we are not going to play forever […] So you have to have planning and I really don’t think in Sri Lanka’s case that was there."

"I don’t want to point fingers but I think overall there should be people responsible," Jayawardene added.

On their last overseas tour, Sri Lanka were soundly thrashed in all formats by New Zealand and had poor outings in the Asia Cup and World T20 tournaments.

Angelo Mathews's men head to England on May 4 for a Test, ODI and T20 series.