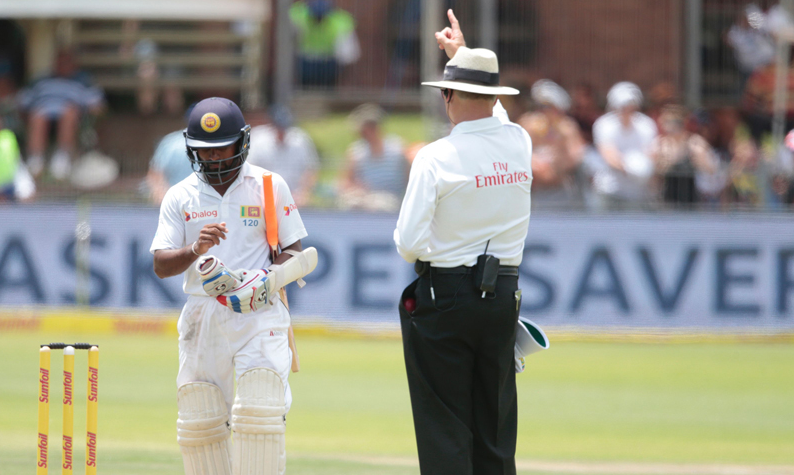 Sri Lankan batsmen have struggled to cope with the seamer-friendly surfaces in South Africa. © AFP

Ahead of Hashim Amla's 100th Test, Sri Lanka face a stern challenge on a pace-friendly wicket at the Wanderer's Stadium in Johannesburg.

Already 2-0 down in the series, Sri Lanka's batting has been poor, particularly on the seaming deck prepared for them in Cape Town, where they were bowled out for just 110 in the first innings.

Although middle order batsman Dhananjaya de Silva said their batsmen will be optimistic that the track is not as green as in Cape Town, the potential extreme pace of the wicket will still make facing the likes of Vernon Philander, Wayne Parnell and Kagiso Rabada a serious threat.

"At Wanderers, I think there's extra pace and bounce, but as a subcontinent nation, it's the seam movement that makes things difficult for us," de Silva said. "I think we should be able to improve on the batting side, since the pitch doesn't seam as much, from what we know. You can't tell until you play, but I'm hopeful this will be more suited to us."

Sri Lanka's main weapon with the ball may lie with Suranga Lakmal, the lanky and slim paceman who stands to overtake Chaminda Vaas's Sri Lankan record of the most Test wickets for a pace bowler overseas. Vaas claimed 16 New Zealand wickets in a two Test series in 1995, while Lakmal now has 12 wickets with two innings still to bowl.

"As a goal, I'd set myself 15 wickets in the series before I came here," Lakmal revealed. "I told the coaches that as well, and thought I would have had a successful tour if I could achieve that. Now, I've got 12 already, so I've raised my target to 18 or 20 wickets. Maybe it's a bit of luck but I've managed to do well so far."

Hashim Amla will play his milestone 100th Test and will be sure to make the most of this opportunity. Usually regarded as one of the finest batsmen in the world, Amla has been woefully out of form against Australia and Sri Lanka and has failed to pass 50 in his past nine innings. He will surely be raring to go and wanting to please the Johannesburg crowd with a big score.

Sri Lanka will hold steady to the fact that Amla's average against them is 33.46, his lowest against all teams except Zimbabwe (he has only played against them in one Test).

South Africa's captain Faf du Plessis has spoken about the need for his team to continue to put pressure on the Sri Lankans and has made his intentions clear, as he had in Adelaide against Australia, that he will be aiming for a whitewash.

"For me, it's about being ruthless and trying to make sure that we're moving into a space as a team where we start to dominate," he said. "That's something we've spoken a lot about, and if you don't do it now in the third Test, then you're just creeping back into old habits."

The weather is expected to be fine for most of the Test, but with possible showers on Friday and Saturday.