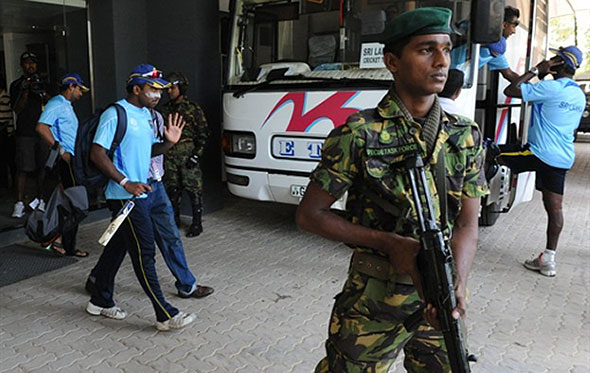 February 25, 2011 (Island Cricket): Unlike Canada, who proved to be mere pushovers in last Sunday’s encounter against co-hosts Sri Lanka, Pakistan are formidable opponents for the home team, says Russel Arnold and Mahela Jayawardene.

Both Jayawardene and Arnold featured in the last World Cup played in the Caribbean in 2007.

Arnold, who is now a part of the ICC Cricket World Cup 2011 television commentary team, spoke to Island Cricket yesterday from Colombo.

“I am nervous about putting my money on this game, as Pakistan look much better than I thought they would,” Arnold said. “Sri Lanka will have to play extremely well to win this one.”

Arnold picked Umar Gul as the bowler to watch out for in the Pakistan camp and named Younis Khan as the danger man with the bat.

“If he [Younis Khan] bats through [the innings] it will allow all the other stroke makers [in the Pakistan side] to be free and play their natural game,” Arnold said.

Sri Lanka chased down 280 plus, batting under lights, against the West Indies, during an ODI series at the Premadasa Stadium last month but Arnold felt that both captains will want to win the toss and bat first.

Meanwhile, vice-captain Mahela Jayawardene said he was surprised that Pakistan were not going into the tournament as favourites.

“I find it surprising that their name is not bandied about in the mix of potential World Cup winners as they have brilliant match winners with both bat and ball,” he wrote on his blog.

“Moreover, they are just as familiar with the conditions so they pose a huge danger to any side, especially in the knockout stage.

“So, despite what people may write or not write, we certainly are fully aware of what this Pakistan side can do to any team on their day with seemingly little effort. Thus, we need to maintain our focus and we know that we have to bring our ‘A’ Game to this match if we are to continue our winning momentum.”

Sri Lanka and Pakistan meet in the 10th match of the ICC Cricket World Cup 2011 on Saturday at the R. Premadasa Stadium in Colombo. Tickets for the Group-A clash have been sold out and a capacity 35,000 crowd is expected.