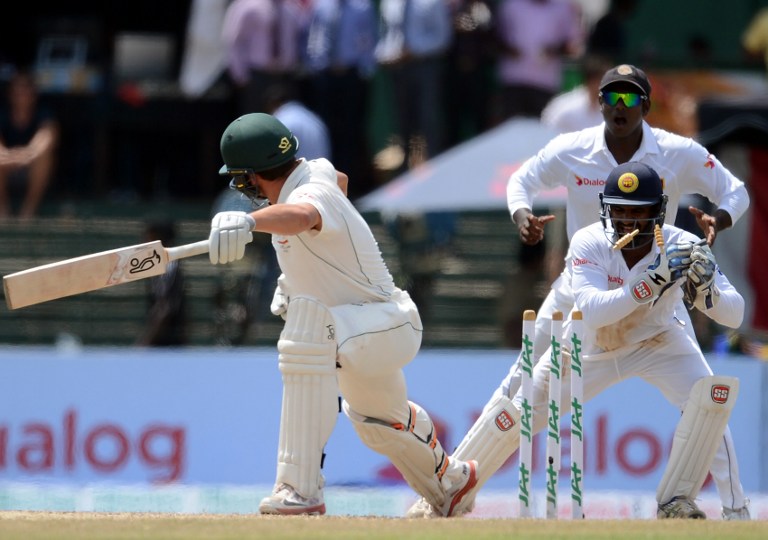 Sri Lankan bowlers brought their team back into the game, leaving Australia with only a slender lead. © AFP

After a phenomenal partnership between Steve Smith and Shaun Marsh finally came to an end, Sri Lanka were able to work themselves back into the third and final Test in Colombo, with Australia finishing on a total of 379.

Sri Lanka then scored 22 for the loss of night-watchman Dilruwan Perera to put themselves two runs behind Australia.

The wicket did not deteriorate to the extent it was expected to, and Smith and Marsh carried on with aplomb and the greatest of ease. The pair resumed with their partnership already past the century mark at 141/1. Smith in particular was effective in his use of the feet, while Marsh drove down the ground with authority.

The Sri Lankan fielding effort flagged, and a number of tough chances were put down, including a dropped catch at slip by Angelo Mathews early in the day, granting Marsh a vital life.

The duo got through to lunch unscathed before Suranga Lakmal finally broke through, sending a miscued straight drive back onto Marsh's stumps. It had been a gargantuan effort for Marsh, who came into this series as a replacement for the under fire Joe Burns. He had lasted 281 deliveries and struck 19 fours.

But Smith followed him to the pavilion soon after, as he was brilliantly stumped by Kusal Perera off the bowling of Herath. Moises Henriques followed suit in the same manner for just four, and at 283/4, Sri Lanka had fought back well.

Rangana Herath, who has tormented the Australians, bagged his 25th five-wicket haul in Test cricket. © AFP

The under fire Mitchell Marsh followed the example of his brother Shaun with an accomplished knock of 55, but once again there was relatively little resistance from the rest of Australia's batsmen.

Adam Voges was LBW to Rangana Herath for 22, but wicketkeeper Peter Nevill kept Mitchell Marsh company with 14 from 34 balls. Mitchell Marsh was finally caught off Herath, and from there, the Australian tail fell in quick time.

Nathan Lyon granted the struggling Dilruwan Perera his first wicket of the match, while Herath was the main destroyer with 6-81, as Australia's innings ended on 379.

Sri Lanka sent in Dilruwan Perera as a nightwatchman for Kaushal Silva, as he had earlier split the webbing on his fingers with a misfield, but the plan backfired. Australia's strike weapon Mitchell Starc sent him back to the pavilion, LBW for 8.

Nonetheless, Dimuth Karunaratne and Silva saw out the remaining overs to put the balance of the contest just in Sri Lanka's favour.

The home side will hope to get around 250 in front tomorrow and then give themselves a day to bowl Australia out on what may be a wearing pitch. The visitors, meanwhile, will be hoping for damage limitation and an easy chase.