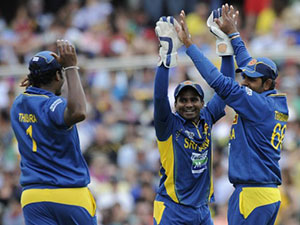 Sri Lanka, currently ranked fourth, can hope to move up a place to third in the ODI team rankings table if they beat Pakistan in the five-match ODI series starting on December 18 in Sharjah.

Sri Lanka will need to win the series against sixth-ranked Pakistan by 4-1 or better to move up to three.

Irrespective of the outcome of the series, Pakistan will remain in sixth position, but if Pakistan wins the series, then Sri Lanka will drop down to fifth place.

The closest Pakistan will come to Sri Lanka in the rankings table would be if it sweeps the series 5-0. In such a scenario, Sri Lanka and Pakistan will be on par with 105 ratings points, but Angelo Mathews’ side will be ranked above Misbah-ul-Haq’s men when ratings are calculated beyond the decimal point.

Meanwhile, fifth-ranked Kumar Sangakkara will start the series as the highest-ranked batsman from either side. The only other batsmen on either side inside the top 20 in the rankings for ODI batsmen are Tillakaratne Dilshan in seventh and Misbah-ul-Haq at nine.

Outside the top 20, the other batsmen likely to be seen in action during the upcoming series are Mahela Jayawardene in 22nd place, Umar Akmal in 27th, Mohammad Hafeez in 34th, Angelo Mathews in 36th, Ahmed Shehzad in 44th, Dinesh Chandimal in 47th, Lahiru Thirimanne in 52nd and Shahid Afridi in 54th.

Pakistan spinner Saeed Ajmal starts the series as the number-one ranked bowler. In the absence of sixth-ranked Rangana Herath, Saeed Ajmal will be the only bowler on either side to feature inside the top 10.

Other bowlers sitting inside the top 20 include Mohammad Hafeez in 12th, Nuwan Kulasekara in 16th and Junaid Khan in 19th.

Outside the top 20, bowlers who are likely to play are Mathews in 23rd, Shahid Afridi in 29th, Lasith Malinga in 30th, Ajantha Mendis in 45th, Thisara Perera in 47th, Abdur Rehman in 53rd, Tillakaratne Dilshan in 54th and Sachitra Senanayake in 59th.