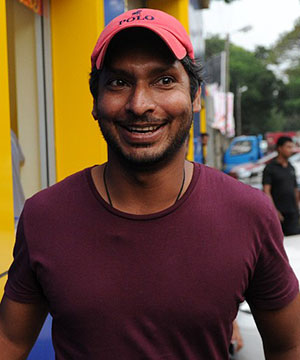 Weighing in on the recent speculation on whether he would play for his Sri Lankan provincial side Kandurata or his IPL team Sunrisers Hyderabad, Kumar Sangakkara said that the choice was not his to make.

"The players don’t have a choice," Sangakkara told Island Cricket, when asked which team he would be representing at the Champions League T20 tournament in India later this year.

"The rules are very clear that your IPL franchise gets the first option in cases where players qualify for the tournament in two or more teams. These rules were agreed by all participating stakeholders in the Champions League.

"In my case there are two scenarios: either Sunrisers select me in their final 15-man squad and I will have to play for them, or they don’t select me and I will be available for Kandurata.

"My understanding is that all squads are to be finalised by August 21.”

As per tournament rules, in the event a player belongs to two teams in the Champions League, the IPL team must pay $150,000 to the player’s home team. SLC will be the direct beneficiary of this sum, as the winners of the inter-provincial T20 tournament, Kandurata, are not a privately-owned franchise.

In the event Sangakkara plays for Kandurata, the financially-struggling SLC will miss out on much-needed revenue.

Commenting on the matter, SLC secretary Nishantha Ranatunga told ESPNCricinfo recently that the "preference is for them to play for their country," which helped spark a debate over whether Sangakkara would choose his IPL team or his provincial side.

Last week, Kandurata defeated Basnahira in the inter-provincial T20 tournament to qualify for the Champions League qualifiers in India in September.