August 11, 2011 (Island Cricket): The recently concluded Murali Cup 2011 tournament, the first ever international school cricket tournament, hosted in southern Sri Lanka was played between 12th – 18th July 2011 as a joint collaboration between Red Dot Tours and the Foundation of Goodness (FOG). The Murali Cup was conceptualized to unfold as an effort to unify local and international sports communities in reverence of the sportsmanship and immaculate achievements of the cricketing legend, Muttiah Muralitharan, who has assisted disadvantaged persons in Sri Lanka through countless humanitarian endeavours.

Not only did the Murali Cup provide opportunities for school level cricketers coming from different backgrounds to show their talents, it also promoted the Marylebone Cricket Club’s (MCC’s) Spirit of Cricket concept through a presentation by Roger Knight, which encouraged social interaction between children of different ethnic, religious and economic backgrounds.

The tournament also conceived much support from the media and sponsors, as it was designed to raise funds for the FOG’s Learning and Empowerment Institute in Mankulam – north of Sri Lanka.

These teams were divided into two groups of four teams and each team was allotted to play three games. The FOG Academy, St. Patrick’s, Dulwich and KLCA made it to the semi finals, with FOG Academy and Dulwich making it to the final. 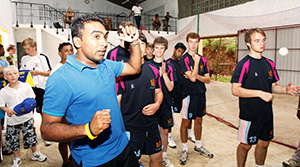 On the day before the finals, Kumar Sangakkara and Mahela Jayawardena, former captains of the Sri Lankan cricket team, dedicated their time to conduct a coaching session at the Seenigama Sports Academy. Players belonging to all eight teams participated at this coaching camp, where many techniques, insights and playing experiences of the two Sri Lankan greats were discussed.

Sangakkara and Jayawardene were also joined by Mario Villavarayan (fast bowling and strength conditioning coach) Lanka de Silva (wicket keeping coach) and C. Kodikara (fielding coach) from Sri Lanka Cricket to train the youngsters. They were also assisted by FOG cricket coaches and other school cricket coaches who work closely with the FOG.

As much as the Murali cup was a sporting event, it did not fail to provide community aid spirit for the teams that came in.

An entire day was dedicated for the foreign teams to blend into the community and work together as a team, in the spirit of giving back to the needy. In this light, the Seenigama Sri Wimala Buddhi Maha Vidyalaya’s school classrooms were painted and a beach cleaning campaign was also carried out. The day ended with a karate demonstration by the FOG Karate Instructor and his team of Instructors. This was a fantastic experience for all the boys.

After the civil war of three decades, it was the first time in their lifetime that players of St. Patrick’s College – Jaffna visited south of Sri Lanka. Upon invitation from Kumar Sangakkara, students of St. Patrick’s College whole-heartedly set out on a journey in which they did not know what to expect. By the time they came to Seenigama, they did not have a clue on what kind of experience they will be faced with during the week they were to reside within a Sinhalese community. They did not know what to expect or whether the pre-conceptions they held about their fellow Sinhalese citizens were true.

Following a warm welcome by the FOG Sports Academy staff and the typical southern hospitality experienced by the cricketers from Jaffna, new bonds were built and better understanding was reached.

Therefore, the Murali Cup brought in the spirit of reconciliation to the center-stage. It allowed an opportunity for teams coming from different ethnic backgrounds to rejoice. And most importantly, it provided a platform for players from the north and the south to jell in together through sportsmanship to stand up for our nation. 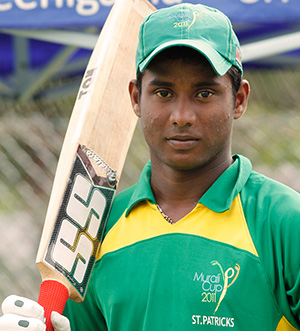 “We fought hard for victory. Overall, the Murali Cup was a different experience with us being treated so well. I have made friends with both local and foreign players. They are already added on Facebook as friends”, said Eric Prathap, the star bowler of the St. Patrick’s College – Jaffna team, who took a hat-trick against KLCL Malaysian Academy during the tournament.

Wanting to ensure that the visitors from the north had a good time in the south, the owner of ‘Refresh’, a famous restaurant in Hikkaduwa, treated the lads from Jaffna to a meal outing free of cost.

Awed by the generosity that extended beyond hospitality they have ever known or experienced, the St. Patrick’s College team made promises to revisit Seenigama and in return, invited the southerners to visit Jaffna.

It is to see Sri Lankans rejoicing this way in peace that many have sacrificed their comforts of living and lives itself, in a brutal war. Therefore, the biggest victory of the Murali cup, after all, is to have laid the foundation on which reconciliation and peace is established.

“The Murali Cup is a tribute to a legend who has contributed immensely off the field for the betterment of humanity and a fitting reciprocation for someone who has done such amazing work in the South," Kushil Gunasekera, founder/chief trustee of FOG said.

"As for the concept itself, the most prominent feature was to enable the cricket team of St. Patrick’s College – Jaffna to explore new horizons by interacting with overseas teams and savour the hospitality in the south, which for them was something completely new and unexpected, not knowing the reception.

"However, they left with fond memories promising to return as their expectations had been surpassed by way of the ‘caring and sharing’ attitude that helped to build unity, goodwill, harmony, reconciliation and peace.

"I salute all those who made this event a reality especially, the three legends; Muttiah Muralitharan, Kumar Sangakkara and Mahela Jayawardena, who graced the occasion spending much time imparting their invaluable knowledge to youngsters, for whom this may be a once in a lifetime opportunity."

The Murali Cup final was played at the picturesque Surrey Village Cricket Grounds in Maggona on the 18th July between the FOG Academy and Dulwich College.

The spectacular final was dominated by the sensational batting of Adeesha Thilanchana, who scored a whirlwind 100 not out and a scintillating 52 not out off 15 balls by FOG skipper Pulina Tharanga. Adeesha’s hundred was reached off the last ball of the innings, which allowed the FOG Academy to score 245 for 2 in 35 overs. As a result of this stunning batting performance, Dulwich College – the strongest of four English teams in the tournament – wilted under pressure to reach a poor 72 for 8 before rain stopped play in the 22nd over.

Other highlights of the event for the winning team included, Pulina Tharanga of FOG Academy being named the Player of the Tournament for his 184 runs and 15 wickets. The winning team was presented the trophy by Muralitharan. In addition, Tharanga was gifted with a special Reebok bat by Mahela Jayawardena. 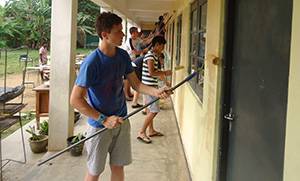 The tournaments plate final was played between KLCA Malaysian Academy and St. Patrick’s College – Jaffna, with St. Patrick’s emerging as winners at the end after an absorbing match.

“We are grateful for the FOG for inviting us in and for the goodness shown," coach for St. Patrick’s College A.S. Nishanthan said.

"We received very good treatment and a massive crowd support even while at play. The Murali Cup was a very good opportunity for young boys from the north to play cricket outside the northern district for the first time, and against different teams, while building good relationships.

"Our heartfelt thanks extend to Kumar Sangakkara for making all this possible for St. Patrick’s College.”

The Murali Cup was sponsored by Elephant House, while MAS, Etihad Airways, YES FM and Sports First were co-sponsors of this unique initiative that Red Dot Tours and the Foundation of Goodness hopes to organize next year around, as well. Among the many contributors who made Murali Cup possible, special thanks rest with Roger Knight, former Secretary and Chief Executive of the MCC; without his vision and support, the success of this event would not have been possible.