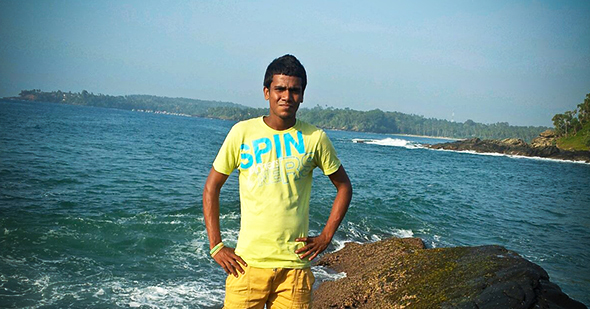 Teenager from Sri Lanka defies all odds to excel on the cricket field
By Hilal Suhaib | October 6, 2012

It’s easy to forget that he is still a teenager when listening to him talk. He comes across a lot older than 18. Perhaps growing up in a household where a pair of shoes was a luxury makes you grow up faster. Surely the immense psychological trauma of losing both parents before his 15th birthday has played a part.

Pulina Tharanga was just 11 when the Indian Ocean tsunami changed his life forever.

“I went to school to meet my cricket coach that morning. After arriving there, my coach asked me not to go back home because the sea had come in,” Tharanga tells me, recalling that fateful day in 2004. “I grew up near the sea, so I assumed it was just high tide.

The south of Sri Lanka, where Tharanga hails from, always had a certain charm about it. Stretched all along the coast were modest but quaint sea-side communities. It wasn’t unusual to see colourful boats and trawlers lined up on pristine beaches and fishing nets hanging from trees. Most fished for a living and enjoyed their coconut toddy — it was an uncomplicated existence.

The tsunami was about to change all that.

“There was nothing left. I couldn’t even see the foundation of our house,” Tharanga described what he saw when he found his way back home after spending two days at a friend’s house. He had been unable to return sooner, as roads were impassable and trains had ground to a halt because of the destruction caused by the tsunami. “I asked my brother where everyone was, he told me that my mother had died. I then asked him where her body was, and he told me they had not found her yet.

“We searched for my mother’s body for four consecutive days, but we couldn’t find her.”

Tharanga’s brother and his sister had survived unscathed, but his father lay in a hospital nearby after sustaining serious injuries. Encircled by devastation, the three siblings — all still children themselves — had to largely fend for each other initially.

“When I went to see my father in the hospital, he cried so much. He was very upset that he could not save my mother,” he recalls. “When my parents heard about the tsunami, they decided to go to the nearby temple and climb a tree. The branch broke, and they both fell into the water — they were separated.

“My father cannot forgive himself for not being able to hold on to her.”

What life had in store for him next was simply cruel. Three years after the tsunami, just when Tharanga’s family began rebuilding their lives, his father perished at sea. “Other fishermen there that day said that he got a cramp while swimming and he drowned,” he explained. These catastrophic events so early in his life made passing his GCE Ordinary Level exams an insurmountable challenge. Despite three attempts, Tharanga was unable to complete his education, but, his gift as a skilled cricketer would come to his rescue.

Cricket, however, is not a cheap sport.

“When my parents were alive, I found it hard to play cricket because a pair of training shoes was too expensive for us,” he says. “Once, when I told my mother that I was selected to play for my school, she looked upset. I asked her why she looked so sad, and she said that she was happy that I was selected and wanted me to play cricket, but she didn’t have the money to buy me shoes or any other equipment. Later, my coach spoke to her and explained that I could play very well and convinced her to let me play.

“Every morning, my mother would make string-hoppers and I would sell them to the shop near our home. We would get 75 rupees for 100 string-hoppers. Eventually, we raised 2000 rupees for a pair of shoes.”

What his coach at Sri Devananda College saw in him was also quickly spotted by local philanthropist Kushil Gunasekera. The generosity of Gunasekera’s charity the Foundation of Goodness was well known amongst the locals in the south before the tsunami, and it wasn’t long before Tharanga came knocking on the foundation’s doors.

Gunasekera is also Muttiah Muralitharan’s manager and himself a cricket enthusiast.

“When I asked him what he bowls, the very fact that he mentioned leg spin got me really excited,” Gunasekera said, recollecting his first meeting with Tharanga. Since then, the Foundation of Goodness has provided Tharanga much-needed financial support, paving the way for him to fulfil his late mother’s dream of him representing Sri Lanka one day.

Remarkably, at the age of 18, Tharanga has already played first-class cricket and was selected to represent Sri Lanka at the ICC Under-19 World Cup in Australia this year.

In Brisbane last month, Tharanga strode out to bat with Sri Lanka reeling after South Africa’s quick bowlers had demolished their top order during an under-19 World Cup clash. Sri Lanka looked unlikely to surpass 100. Tharanga, who describes himself as a leg-spinner who can bat, stroked an unbeaten half-century.

It was a performance worthy of a congratulatory message from Kumar Sangakkara.

“Sangakkara pointed out that he showed fine character by way of a text message when he made that 50 against South Africa under tremendous pressure, with Sri Lanka at 68 for 6,” a proud Gunasekera said.

Gunasekara has a right to be proud of the young cricketer’s achievements, for Tharanga’s story is an inspiring one, scripted with the aid of Gunasekara’s praiseworthy charity. Orphaned by the sea, against all odds, Tharanga has overcome many obstacles and many a hardship to repay the kindness and faith shown in him by Gunasekera and others with his performances on the field.

“He could be the first orphan to reach this status,” says Gunasekara.