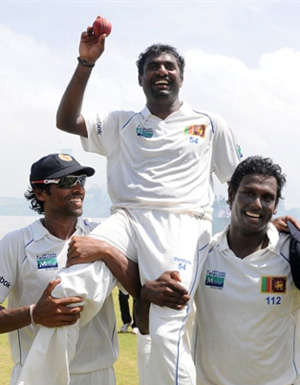 A special honour for Murali
By Rex Clementine | December 9, 2012

During Sri Lanka’s last Test tour of Australia in 2007, Cricket Australia (CA) bestowed on ace spinner Muttiah Muralitharan an honour that has never been conferred on any other Sri Lankan cricketer. CA named the trophy to be awarded for the winners of the Test series as the Warne-Muralitharan Trophy.

The fact that a trophy was named after Murali while he was still playing was indeed unique and a worthy recognition for the world’s highest wicket taker.

"The two greatest bowlers in world cricket history have lent their names to a perpetual prize that will be played for in the Test series between Australia and Sri Lanka," CA said in a statement.

The trophy contained silver casts of Warne and Muralitharan’s right hands and cricket balls used by both men while playing for their countries. The hands sit on a gold-plated bronze base, and it apparently took the makers over 200 hours to produce the trophy.

The trophy was announced to mark 25 years of relationship between CA and Sri Lanka Cricket. There have been rocky moments between the teams — Murali had been called for chucking in 1995 and a few months later, in 1996, Australia refused to fulfil their World Cup fixture in Colombo.

Warne, defending the decision to not to play, said at the time that he feared a bomb may go off in Colombo while the Australians are out shopping. Sri Lanka’s then foreign minister Lakshman Kadirgamar, a distinguished cricketer himself, responded with: "shopping is for sissies".

"The trophy is a celebration of the relationship between [CA and SLC], and a fitting way to commemorate 25 years of Test cricket between our two countries," the then CA chairman Creagh O’Connor said at the inauguration.

"The trophy is a stunning tribute to both men, and strengthens the bond between Australia and Sri Lankan cricket. Shane and Murali’s spinning hands have been immortalized in silver holding match used cricket balls and I’m sure the trophy will become one of the most well-known and prestigious in world cricket."

The 2007 series was also the last Test tour of Australia for several leading Sri Lankan cricketers such as Sanath Jayasuriya, Chaminda Vaas, Marvan Atapattu and Muralitharan. Prior to the series, the Sri Lankans had declared that they were determined to win a Test Match in Australia. However, they lost both Tests, with Kumar Sangakkara’s magnificent knock of 192 in the second Test in Hobart being the highlight for the tourists.

Australia retained the trophy when they toured Sri Lanka last year for a three-match series by wining 1-0. The tourists won the first Test in Galle and managed to hold onto two draws at SSC and Pallekele to retain the trophy in Michael Clarke’s first series as captain.

SLC pathetically failed to market the series during that tour. There was hardly a mention about the Test series being played for the Warne-Muralitharan Trophy by Ten Sports, SLC’s host broadcaster. It was later corrected only after intense media pressure.

Newspapers also reported that Muralitharan had expected SLC to call him to come over to present the trophy, like Warne had done the previously, but the call never came. SLC said that it didn’t strike them that a trophy had been named after the iconic cricketer.