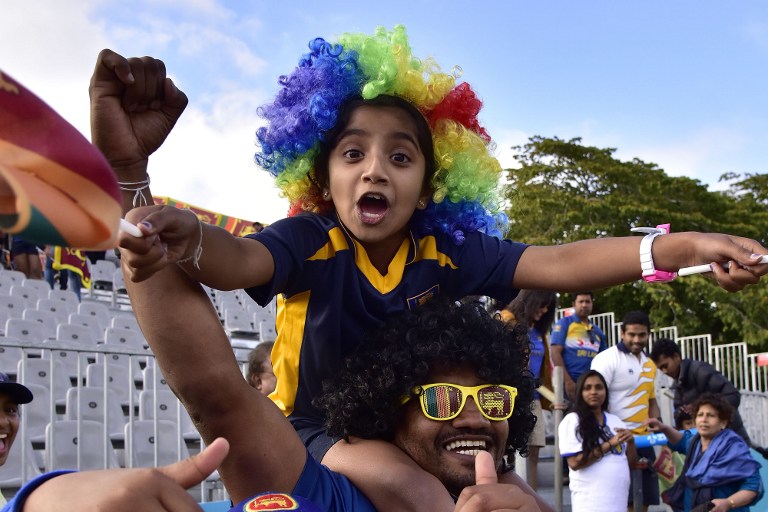 Cricket can be played in a unique national style to bring people together, which is one of the sport's many appeals. © AFP PHOTO

A colleague at work recently asked me why cricket was so important to me. Why, when as a believer in social justice, did I spend so much energy watching such a time consuming game? Why, when there were so many important ideas to be said as an anti-racism and disability advocate, did I use so much of my social media space writing about this antiquated British colonial sport?

Shortly thereafter, another colleague was equally bemused at the fact that Sri Lanka's loss to South Africa could send me into days of stupor and that I grieved for months over the deaths of cricketing legends like Richie Benaud and Tony Grieg whilst I remained relatively unflustered following events such the loss of Australia's progressive political party or the passing of the great Nelson Mandela.

That this game can hold such sway and importance in a cricket tragic's life can potentially be put down to three key reasons: cricket's sense of tradition and its ability to test players' character ethically, mentally and physically, the way it can be played in a unique national style to bring people together, and the fact that it can produce characters whose importance transcends the sport itself.

A sport with a long and storied history, cricket has long prided itself on its own sense of tradition and honour. The sense of fair play has been embedded in the sport of cricket since time immemorial and has been encapsulated in Ted Dexter's Spirit of Cricket, which is now a preamble to the Laws of Cricket.

Indeed, as Tony Grieg suggested in his 2012 Spirit of Cricket Lecture (previously the Cowdrey Lecture) to the MCC at Lord's:

"When you talk about the Spirit of Cricket, you're talking about not just a game, but the way you live your life […] You're talking about caring for people less fortunate than us. The Spirit of Cricket is not just about adhering to the Laws of the game, it's about something far more enduring than that. Adhering to a set of values that can elevate you above the humdrum, above the cynicism, that can drag you down if you let it."

The spirit of cricket: this image of Grant Elliott consoling Dale Steyn after the 2015 World Cup semi-final went viral on social media. © Reuters

The world renowned umpires, Dickie Bird and Simon Taufel are excellent examples of characters who have embodied this Spirit, whilst the ICC's chief match referee, Sri Lankan Ranjan Madugalle, is one who is currently putting it into practice.

Cricket is also a test of character in the physical and mental sense as well as the ethical. If one is losing at a game of American Football or rugby, it can take only 20 minutes of concerted effort to put your team back into a winning position. Conversely, if a batting side is languishing at 4/50, it may take a day to engineer a match saving innings, and another day still to sway the game in your favour with the ball, leading to a highly suspenseful package that keeps fans hooked.

One must naturally add to all this cricket's aforementioned timeless sense of tradition — the series now known as the Ashes, played between Australia and England, dates back to 1877 and is the one of the world's oldest international sporting rivalries.

The Royal-Thomian collegiate match in Sri Lanka meanwhile, first took place two years after the first international Test. The famous annual match, contested between St Thomas' College and Royal College, is the world's longest running continuous fixture (as the Ashes series stopped for wartime) and is the first recorded cricket match on the island.

The game's intrinsic sense of tradition, the test of one's character and a sense of fair play make cricket immensely enticing viewing, and such ethics are surely befitting for one who sees themselves as an advocate for those on the margins of society. This sense is increased when one considers the self-determination which can be found through cricket, particularly on a national scale.

The unstoppable powerhouse that was the West Indies, came to dominate cricket through an entirely unique brand of aggressive bowling and dashing, cavalier batsmanship. With a feared quartet of pace bowlers capable of bowling in excess of 90/mph and the swashbuckling strokeplay men the likes of Viv Richards and Clive Lloyd, they not only decimated teams wherever they played, but thrilled audiences worldwide on an unprecedented unbeaten run from 1980 to 1995 where they did not lose a single Test series.

The national team's rise in the West Indies gave the archipelago a sense of collective pride and empowered the diaspora Caribbean community with a renewed sense of confidence with its unmistakable Calypso style.

Sri Lanka too managed to play a brand of cricket all their own, when they broke free of English colonial shackles under the leadership of the innovative Arjuna Ranatunga during the 1996 World Cup. Bucking with the normative classical English style, Sri Lanka's captain encouraged his team to seek unorthodoxy as their path to victory, and told Sri Lanka's openers Sanath Jayasuriya and Romesh Kaluwitharana to attack from the first ball of the innings.

The result was not only a success, with Sri Lanka — the previous whipping boys of international cricket — taking out the World Cup, but it also garnered them millions of fans back home, and gave encouragement and belief to a nation on its knees as a result of a crippling civil war.

Among others, West Indians, Sri Lankans, South Africans and the emerging Afghans can attest to cricket's power to the power to heal, empower, encourage and strengthen its fans and can be played in a style which truly encapsulates the country's national character, a powerful tool in the hands of one who stands against the scourge of racism.

Lastly, cricket matters because it has the ability to produce players and spectators whose impact on the wider world has gone beyond the confines of cricket itself.  With role models such as these, why would someone with aspiring leadership potential not be drawn to the undeniable magic of cricket?

There are those whose reputation and larger than life personality precedes them-going right back to the origins of Test cricket, it was often said that aside from the Queen herself, the legendary W.G Grace was the most recognisable British face in the Victorian Era world. The bushy bearded batsman (known as Doctor Grace) of course played in Test which gave birth to the Ashes in 1882.

Then there are those who are allrounders in more than just the mere cricketing sense of the word and seem to be able to possess the Midas Touch, achieving greatness in whatever field they set their eyes on.

The English scholar C.B Fry was one such man. A stellar batsman and captain for Sussex who scored in excess of 30,000 runs, Fry not only averaged 32.18 in Test but also had an honours degree in Classical Moderations, represented England at football, equalled the world record for long-jump and represented India at the League of Nations, among many other remarkable achievements too numerous to list.

Kumar Sangakkara has been a part of a UN initiative to raise awareness of HIV prevention and reduce stigma around HIV. © UNICEF

Fry has a modern incarnation in the form of Sri Lanka's Kumar Sangakkara. The much loved "Sanga" attended Kandy's prestigious Trinity College, where he won the Ryder Gold Medal for allround excellence. He also pursued a law degree, is fluent in three languages and in 2011 delivered what is widely regarded as the finest Cowdrey Lecture so far, speaking on the history of Sri Lanka and cricket's role in shaping the hearts of its people.

But it would be a fool who pigeonholes Sangakkara as a scholar — aside from his awe-inspiring 20,000 international runs 400+ dismissals and swag of ICC Awards, he is well known amongst his cricketing compatriots for his kindness and generosity. On tour to South Africa in 2006, he paid for two busloads of children in Cape Town to attend the Newlands Test and is also a prominent UN spokesperson for HIV/AIDs.

Of course there are also those legends who have achieved near immortal celebrity status such as the likes Don Bradman, Viv Richards and Sachin Tendulkar. But it is those who go about quietly and loyally following them who often make as much of an impact. Sudhir Kumar Chaudhury has attended every home match that India have played since the year 2003 and is instantly recognisable with the number 10 and name Tendulkar painted on his back along with the Indian flag's colours of white, orange and green.

Then there is "Uncle" Percy Abeysekera, a 78 year old Sri Lankan fan who has followed his team both home and away even before they first gained Test status in 1981. He is especially known for his clever rhyming chants which have made both the Sri Lankan team and their visiting opposition player's laugh for many years.

Perhaps the most loved cricketing hero however, is the visionary, the one who is always ahead of their time and is constantly innovating in many different fields to improve the game and its image in whatever way they can. Whilst many of those already mentioned do fit in to this category through their ambassadorial role in the game, there are some who truly stand out.

For now it is worth examining those names mentioned initially- the recently deceased Richie Benaud and his colleague Tony Grieg. While he was captain of Australia, Benaud prided himself on his ability to bring his players together as a unit, encouraging regular team meetings and being one of the first figures to hug bowlers or fieldsmen after they had taken a wicket. A leader from the front, he was also the first allrounder to the "double" milestone of 200 wickets and 2000 runs. With such astute man-management skills, it is little wonder Benaud never lost a series as captain.

After retiring, he rose to become the world's preeminent cricket commentator for over 50 years, and was the unmistakeable voice of cricket right up until his death earlier this week. It is almost impossible to think of the many historical moments the game has seen without remembering his incisive wit and opinion on them. Benaud not only laid the foundational template for the modern captain, but also set the standard which commentators now aspire to.

Grieg meanwhile, saw and embraced the coming globalisation of cricket. Born and raised in South Africa, he represented Sussex at County level in England before controversially forgoing the captaincy of his nation to recruit players for Kerry Packer's World Series Cricket, a tournament which revived public interest in the game and ensured cricketers received a fair wage at last. He joined his long-time colleague Benaud, settling in Australia as a commentator.

Loved as he was in his home nation and his two adopted countries, Grieg was also widely known in India for his passion for Sachin Tendulkar, and in his later years he fell deeply in love with Sri Lanka, where he was seen as the nation's favourite foreign son. Indeed, so widely known was his fervour for the Pearl Island, he was appointed a tourism ambassador by Sri Lanka Tourism in 2011.

To conclude, a final quote from Grieg's lecture to the MCC at Lords: