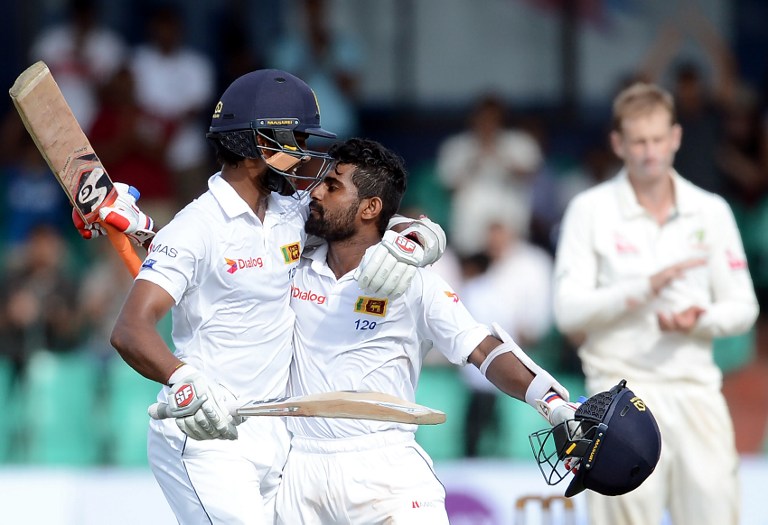 A patient century and return to form for Kaushal Silva enabled Sri Lanka to reach a daunting second innings lead at the end of day four in the third Test at Colombo.

Silva scored 115 and was ably assisted by both Angelo Mathews (26) and Dinesh Chandimal (43).

For the Australian tourists, the best bowler was the much maligned Nathan Lyon. The off-spinner claimed four, but it wasn't enough to stop Sri Lanka from scoring 312/8 and taking a 288-run lead at stumps.

Sri Lanka resumed the day with a two-run deficit at 22/1. There were none of the usual jitters from Sri Lanka's regular openers, and Dimuth Karunaratne looked assured at the crease, making his way to 22 before falling victim to an unusual stumping off the bowling of Nathan Lyon.

The offie bowled a superb delivery that just beat the outside edge and Peter Nevill, seeing the briefest lapse in concentration from Karunaratne, lifted the bails off at the precise second Karunaratne lifted his foot.

Kusal Perera looked dangerous but was ruled out after a somewhat inconclusive replay suggested to the third umpire that there was a faint edge. © AFP

Unimpressed by his brain fade, Karunaratne was soon followed to the pavilion by Kusal Perera after a quickfire innings of 24 from just 25 deliveries. He was caught behind off the slimmest of top edges, with Jon Holland this time the lucky bowler.

At 69/3 and with a slim lead, it was not looking good for Sri Lanka. Kusal Mendis followed Perera's attacking lead and took to Lyon, smashing a four and two massive sixes, before he too was dismissed for 18, this time plumb LBW to Mitchell Starc's searing middle stump yorker.

Sri Lanka went to lunch a few wickets shorter than they would have liked at 109/4, with Mathews freshly arrived at the crease on four and Silva on 32. But the pair saw off the first hour of the post-lunch session, before a swept top-edge again claimed a wicket, this time that of Sri Lanka's captain, but at that point Sri Lanka were 156/5 and in a slightly more-comfortable position.

Dinesh Chandimal, fresh from a century on days one and two, took his time to bat calmly through to the post-tea session, scoring a measured 43 and keeping Silva company until he reached his ton. The former was given out LBW on review from a big-turning delivery from Lyon. Chandimal had added 90 for the sixth wicket with Silva.

The sixth wicket has now contributed the highest amount of runs in a single Test match against Australia, after a stellar 211-run partnership between Chandimal and Dhananjaya de Silva had dragged Sri Lanka back into the match from 26/5.

After Chandimal's departure, an exhausted Silva managed to add 30 for the seventh wicket with de Silva, before he was finally caught by Steve Smith off the bowling of Holland for 115. He had batted for 269 deliveries and stroked 10 elegant boundaries in his vital knock.

First innings centurion de Silva batted through with the tail, but Rangana Herath fell for five off Lyon and Smith claimed his third slip-catch of the innings. The partnership between de Silva (44) and Lakmal (0) is now at 21, but it remains to be seen whether Mathews will continue batting tomorrow or set Australia a target overnight in order to push for a 3-0 series whitewash.