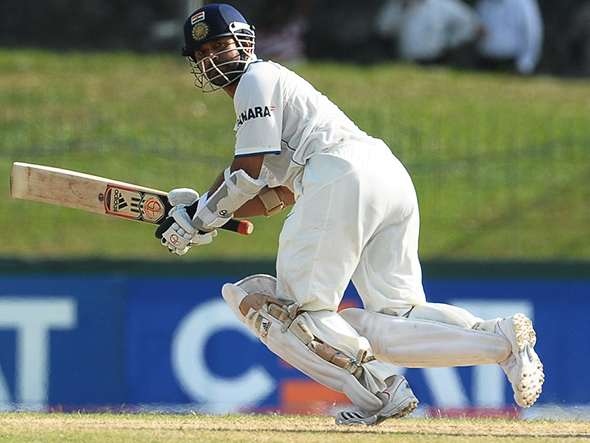 Indian cricketer Sachin Tendulkar plays a stroke during the third day of the second Test match between Sri Lanka and India at The Sinhalese Sports Club Ground in Colombo on July 28, 2010. AFP PHOTO/ Lakruwan WANNIARACHCHI.

Star batsman Sachin Tendulkar hit an unbeaten hundred, his first on Sri Lankan soil in 11 years and helped the tourists to post 382 for four at stumps on day three in reply to Sri Lanka’s total of 642 for four at the Sinhalese Sports Club ground in the second Test between the countries yesterday.

Tendulkar, who was dropped on 29 by wicketkeeper Prasanna Jayawardene off the bowling of Dilhara Fernando, made the Sri Lankans pay as he compiled his 48th Test hundred and the ninth against Sri Lanka.

Since Tendulkar hit a century in the 1999 Asian Test Championship at SSC, no Indian barring Virender Sehwag had made a Test hundred in Sri Lanka and in good batting conditions, the world’s highest run scorer wasn’t going to miss out.

Required to make 442 to avoid follow on, the Indians were trickily placed on 241 for four when V.V.S. Laxman was dismissed before tea. But Tendulkar added an unbroken 141 run stand for the fifth wicket with debutant Suresh Raina to take India to safety.

Raina went onto compile a half-century on debut and was unbeaten on 66 at stumps with Tendulkar on 108.

After beginning the day on 95 for no loss, Virender Sehwag missed out on a well deserved hundred when he became the first overseas player to be dismissed for 99 on Sri Lankan soil. Earlier Sanath Jayasuriya had been dismissed on 199, also at SSC while Mahela Jayawardene had been out for 99 in Galle.

Sehwag, who had been in excellent form in the series, had looked dangerous picking up boundaries at will and became Suraj Randiv’s first victim in Test cricket when he charged the off-spinner’s first ball of the day and was stumped by wicketkeeper Prasanna Jayawardene.

That ended a 165 run stand for the first wicket between Sehwag and Murali Vijay and in the next over, Ajantha Mendis, returning to the side after missing the first Test in Galle, picked up Vijay when he had the batsman leg before wicket.

India were cruising along with 20 minutes to go for lunch and the score reading 165 for no loss, but Sehwag’s dismissal brought Sri Lanka two further wickets with three batsmen falling for the addition of eight runs. Dravid was the third batsman to be dismissed when Randiv had him leg before wicket.

Tendulkar batted the middle session cautiously without taking any risks, but cut loose in the final session. The only wicket to fall in the afternoon session was that of Laxman when Mendis trapped him leg before wicket.

Tendulkar reached his half-century by hoisting Randiv for a six and continued to prosper in the final session. Sri Lanka opted for the new ball in the 97th over and surprisingly it was Randiv who bowled the first over ahead of Dilhara Fernando and Dhammika Prasad. The new ball went out of shape after just eight deliveries, but even the replacement failed to bring the Sri Lankans a breakthrough.

Dhammika Prasad bowled just seven overs in the day and the team management said that he was having some breathing problems after second day’s play, but had recovered by yesterday.

Tendulkar reached his century by sweeping Randiv for four. His century came in 167 balls with 13 fours and a six. Raina, meanwhile, reached his half-century in 91 balls with eight fours and was unbeaten on 66 at stumps. Tendulkar looked solid towards the end, not that he struggled earlier on, but close to stumps it was the former Indian captain who was calling the shots and crashed the last ball of the day bowled by Mendis for four driving past mid-off.