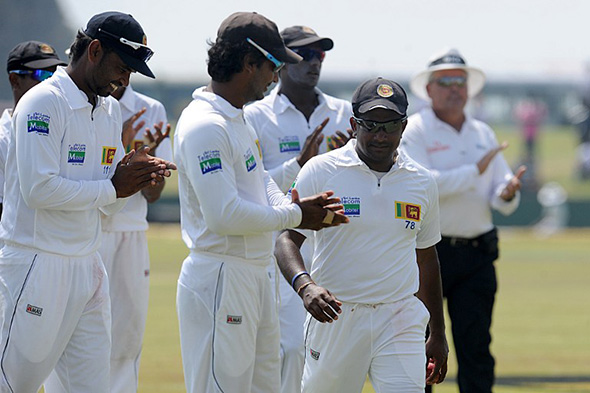 Team-mates applaud Rangana Herath as he walks off the field at Galle. © AFP

With plenty of wickets in hand and nine runs in front, New Zealand were comfortably placed at the end of day two. The Test was evenly poised at the start of day three, but Sri Lanka’s spinners soon exposed the visitors’ weakness against spin to help the hosts pull off a victory in under three days and hand Ross Taylor’s men their fifth consecutive Test series defeat this year.

Man of the match Rangana Herath followed up his first innings five-wicket haul with 6/43 to dismiss New Zealand for 118 runs in their second innings and allowed his side to complete a crushing 10-wicket win in the first Test at Galle on Monday. The left arm spinner took a match bag of 11/108 — his second career 10-wicket haul in Tests.

Chasing 93 runs to win, openers Dimuth Karunaratne and Tharanga Paranavithana, who both bagged ducks in the first innings, took Sri Lanka past the winning line, scoring 60 and 31 respectively.

"[Herath] knows what he is doing with the ball and he knows what the batsman is doing as well," Sri Lankan captain Mahela Jayawardene told reporters at the end of the match.

"After Murali, from what I’ve seen in Sri Lankan cricket, he is the next best thing. Others have chipped in but [Herath] has become the leading bowler for us. Because of the pressure he is creating on the opposition and the way he has performed, it has enabled us to be consistent in Test cricket in the last two years or so."

"Herath dominated our batting line-up in both innings. He is a very good bowler at the moment and the leading wicket-taker in 2012," the New Zealand captain said.

"He is very consistent in this part of the world, and we have got to come up with a way of negating his wicket-taking ability. We have to pick ourselves up and give ourselves a chance in the next match."

The second and final Test of the series starts in Colombo at the P. Sara Oval on November 25.