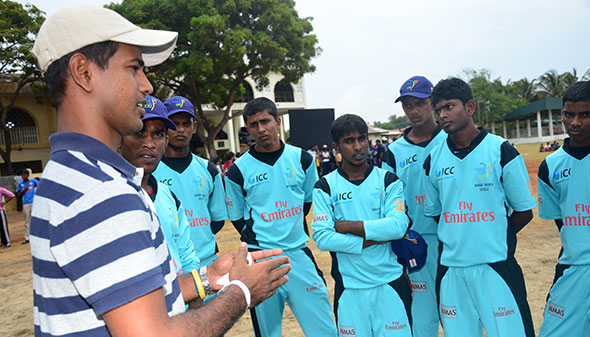 A team from Sri Lanka’s previously war-ravaged north beat tournament favourites Trinity College from Kandy in the opening day of the Murali Harmony Cup 2012 T20 tournament currently being played out in in Jaffna, Kilinochchi, Mankulam, Oddusuddan and Vavuniya.

Jaffna Combined Schools, who were given an early boost to their tournament with a special pre-match pep talk from Sri Lankan all-rounder Angelo Mathews, appeared to be inspired thereafter with a fine performance and stunned Trinity College with a brilliant four-wicket win on Saturday.

Trinity College were bundled out for a modest 100 in 19.4 overs with K. Shirojan taking 4/16. Jaffna then romped home with two overs to spare thanks to an unbeaten 37 from man of the match Edward Edin.

The five-day tournament has been jointly organised by Muttiah Muralidaran’s charity the Foundation of Goodness, travel company Red Dot Tours, the International Cricket Council and the Sri Lanka Army to promote community-building and friendship in post-war Sri Lanka.

The tournament also marked the opening of the IODR Oval, a recently constructed cricket ground in Oddusuddan. The IODR Oval was built thanks to the generous sponsorship of the Indian Ocean Disaster Relief Fund (IODR) and Grange Hotels from the United Kingdom. The development transformed a hitherto barren sports field into a functioning cricket facility for local children with the addition of a large pavilion, toilets, astro-turf cricket nets, scoreboard, sightscreens, an improved outfield, coconut-matting centre wicket and general beautification including the planting of trees.

The other notable results during the day included a thriller between a Mannar-Vavuniya Combined Schools team and Debarawewa Maha Vidyalaya school from Hambantota.

Debarawewa MV scored a challenging 159 for 8 but Mannar-Vavuniya Combined grabbed a dramatic last over four-wicket win as K. Hariparanavan scored an impressive 67, the day’s top score.

Meanwhile, a strong St. Peter’s College team won a very tight match against a talented Trincomalee and Batticaloa Combined Schools team in Kilinochchi by just one wicket, with Jeson Buljons winning the man of the match award for his solid 56.

The morning game at the same venue saw Kilinochchi Combined Schools give a strong Seenigama team an early scare as they were bundled out for just 130 in 15.5 overs.

Seenigama though hit back with the ball, restricting Kilinochchi to 87 for 9 in their 20 overs. Sri Lanka U19 all-rounder Pulina Tharanga was the man of the match.

Both matches at the upgraded Kilinochchi Central College were watched by an enthusiastic crowd of approximately 4000 spectators, who were also entertained by live music, papare bands and a spectacular gymnastics display by the Sri Lanka Army.