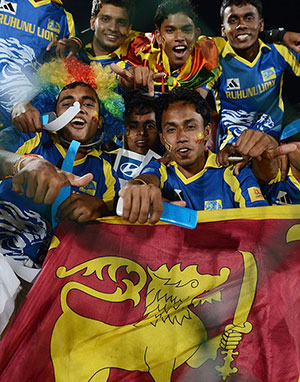 Every administrator I bumped into in Sri Lanka — Sri Lankan or otherwise — was very relieved when Afghanistan gave India, cricket’s largest market, nothing more than a scare during the group stages of the ongoing ICC World Twenty20. India’s fortunes appear to have a direct impact on the success or failure of the tournament. Compared to the ODI World Cup, the ICC seems to have hedged their investments better in the 20-over World Cup. For the most part, audiences are somewhat certain of which eight teams will move on to the next round. And by the time eight becomes four, three-quarters of the tournament is done with and the tournament hopefully is not a financial disaster. One-day World Cups on the other hand, either fall or rise with India’s fortunes.

Talking abut T20 cricket, the various leagues that have mushroomed are seen as obstacles to international cricket by some. The calendar is packed with these tournaments through the year and around the world. And yes, allegations of corruption walk hand-in-hand with these leagues, but good governance can eventually decide their integrity and, at the same time, prevent league cricket from interfering with international cricket. However, one must remember that corruption and greed in cricket doesn’t just affect T20 cricket alone, it has hampered the game for decades. To its credit, T20 cricket has restored some parity into cricket.

Not so long ago, it would be an exercise in patience to sit through a cricket match in India; the facilities and the treatment of fans at the grounds are among the poorest. Still, people paid vast monies to sit through the charade of concrete footsteps for seats, using boundary placards for shade from scorching heat, thundering rains and bird waste. Public toilets were, err, open dumps of waste. T20 cricket and the leagues spawned from cricket’s newest format have perhaps not changed all that entirely, but it has changed things for the better. The leagues and team owners have taken the extra effort to improve facilities to bring more people in, although cricket is increasingly becoming a television sport. Still, women and children flock to T20 matches, and that remains the format’s biggest triumph.

The connoisseur might smirk at it all and call it names, for it may not be a true test of one’s abilities. It is still a test of many abilities. It is still cricket. And runs and wickets matter just as they do in other forms. Wins are wins. The thrill of sixes and fours might not whet everyone’s appetite, but the ability to clear the boundary ropes at will is an amazing skill that must be appreciated. Scoring runs quickly is a boon in any format.

T20 cricket is also perhaps the best vehicle to take cricket to a larger audience globally. It is an action-packed format where even top nations struggle to remain competitive. The game still throws up more surprises than a Dan Brown paperback. It cannot be forgotten that this format has made the game more popular amongst the youth, and has proven to be significant for players and the paying public. It is lucrative for all parties concerned, administrators included. It is time to give credit where it is due and begin to appreciate the many formats of the game, including T20s.