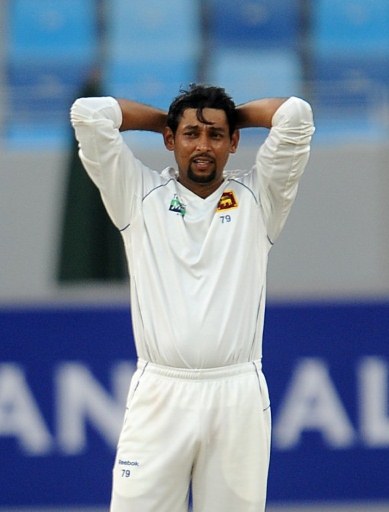 The barren period for Sri Lanka without a Test win continues, as the national cricket team has now spent 15 months without tasting success in Test cricket. In that period, Sri Lanka has played 13 Test Matches, losing four games and drawing nine matches.

Naturally, Sri Lanka’s bowling deficiencies, due to the retirement of Muttiah Muralitharan and the absence of Lasith Malinga, is seen as the main reason for the disappointing run.

True, the bowlers have not been penetrative enough, but the four matches Sri Lanka lost in that period were due to batting collapses that cost the team dearly. On all those instances, barring the current one, the fate of the series was decided on that batting collapse.

Over those 13 Test Matches, Sri Lanka’s bowlers were able to take 20 wickets only on two instances – against Australia in Galle and at SSC. In Galle, it was in a losing cause on a wicket that came in for much discussion, while SSC was in a game Australia played for a draw having taken a lead in the series.

But more than the bowling, it is the batting that has hurt Sri Lanka. Apart from the defeats against India, England, Australia and Pakistan; the mediocre West Indian side forced Sri Lanka to follow-on in their stronghold Galle last year.

Former captain Mahela Jayawardene was pushed out of the ICC rankings for world’s top 20 batsmen for the first time since 2001 early this week. The reason? He has managed just six scores of over 50 in his last 27 innings. Tillakaratne Dilshan is no better, and as captain of the side he must surely be struggling to motivate his players when he himself is not producing any big scores.

His decision to drop down the order was wrong. It came after failures in two Tests against Australia, and the shuffle was a clever ploy to push Thilan Samaraweera out. Now that Dilshan also has not scored runs at number five, can he justify opening the innings in a bid to regain his lost touch?

Dilshan is a devastating player top of the order with an ability to change the complexion of a game in two sessions. It was only two Tests prior to his failure he had smashed a career best 193 at Lord’s, smashing the famous Ashes winning attack to all corners at the Home of Cricket.

So, a player of his calibre deciding to drop down the order, worried about the likes of Trent Copeland and Co. was plainly ridiculous. Dilshan should have remained as an opener.

What the Australian series also suggested was that they were well prepared. Copeland bowling to Dilshan in Galle, positioning Australia’s best fielder at short extra-cover in the second over of the Test suggested that they had found a weak-link in his batting. And Dilshan, after crashing the first ball he faced for four through the covers, fell to the trap – Ponting pounced at a sharp chance and that was a deciding moment in the series.

One can sympathise with Dilshan. He certainly doesn’t have the luxury his predecessors had, as Muttiah Muralitharan has retired. But the captain has done hardly any favours for himself, with successive low scores both against Australia and Pakistan.

Officials of Sri Lanka Cricket were busy trying to organize their Sri Lanka Premier League (SLPL) ahead of the Australian series. Ultimately, both SLPL and the Australian series proved to be disasters. The players, who usually insist on proper preparation ahead of an important series, didn’t mind playing the domestic T20 tournament, as a place at the Champions League T20 was on offer for the winners.

Administrators, as much as players, need to take the blame for the recent slump in Sri Lankan cricket due to lack of planning.