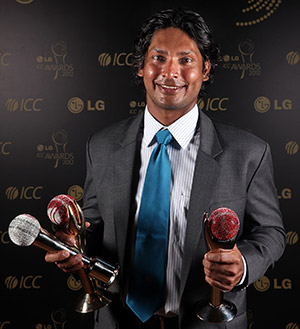 Kumar Sangakkara poses with his awards at the ICC Awards in Colombo on September 15, 2012. © AFP

The 34-year-old was also named in the ICC Test and ODI Teams of the Year, which were announced ahead of Saturday’s awards ceremony.

"I’d like to congratulate all of tonight’s winners who are all highly deserving of their awards. It’s been a fantastic evening and I think a special congratulations is needed of course for Kumar Sangakkara who claimed a spectacular three awards this evening, including of course the prestigious Sir Garfield Sobers Trophy for ICC Cricketer of the Year," ICC President Alan Isaac said.

"I would also like to extend my thanks to all of those on the selection panel and the various voting academies who gave up their time to vote for this evening’s awards."

Sangakkara made five Test centuries, amassing nearly 1500 runs at an average surpassing 60, while also scoring three ODI hundreds on his way to 1457 runs in 37 ODIs in the year.

Sangakkara said that it was an "amazing honour" to win the awards and to be named alongside some of the greats of the game who have won the awards before him.

"This is an amazing honour and I’ve seen the people who have won it before me and the nominees too, to be named alongside them is wonderful," he said.

"I admire them greatly and even more so when I looked up at their records on the screen this evening. It’s great to be amongst them but now to receive this honour this evening, is simply fantastic.

"I have to thank all who have supported me, especially my father who always guided me growing up and continues to do so, my wife and children, my team-mates and coaches."