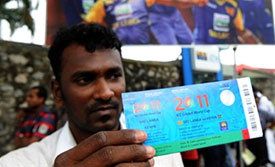 February 14, 2011 (Island Cricket): Tickets for Sri Lanka’s opening match of the ICC Cricket World Cup 2011 are sold out, according to a statement from Sri Lanka Cricket (SLC).

SLC announced a shortwhile ago that all tickets for the Group-A clash between Canada and Sri Lanka on February 20 at the Mahinda Rajapaksa Stadium in Hambantota have been sold out.

The tournament gets underway with co-hosts India taking on Bangladesh in Mirpur on January 19.